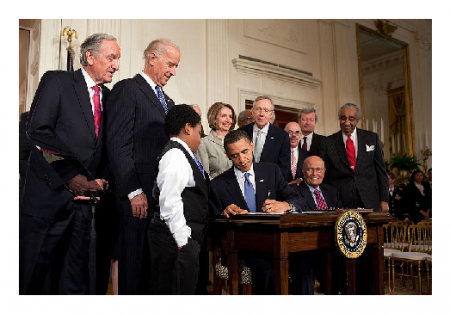 Now, with open enrollment having started and more and more people becoming aware of the benefits of the Affordable Care Act they are now no longer calling it Obamacare but referring to it as ‘Adorablecare.’

Notwithstanding, some people led by the ideological right continue to push back against the Affordable Care Act even at the expense of shutting down the government.

So, as the opposition continues, the government has sought it fit to bring clarity to the debate by listing the following on its website.

Health insurance reform will NOT use your tax dollars to fund abortions.

The health insurance reform legislation maintains the status quo of no federal funding for abortions, except in cases of rape, incest or when the life of the woman is endangered. A federal judge recently wrote “the express language of the [Affordable Care Act] does not provide for taxpayer funded abortion. That is a fact and it is clear on its face.”

Health reform will NOT lead to a government takeover of health care.

One independent group actually called this myth the “lie of the year.” The Affordable Care Act puts people, not health insurance companies or government, in charge of health care. The new law strengthens the existing employer-based health insurance market while making the market fair for consumers by implementing landmark consumer protections. Families and individuals that don’t have access to affordable coverage can receive tax credits to help them purchase coverage in the private health insurance market. There is no government-sponsored, public, or “single payer” plan in the law.

The Affordable Care Act will help bring down the cost of health care.

The health policy experts and economists who have looked at this legislation have said we are pursuing every possible mechanism to reduce health care costs. The Congressional Budget Office found that health insurance reform will reduce the deficit by $210 billion in this decade and by more than $1 trillion over the following 10 years. And a family of four would save as much as $2,300 on their premiums in 2014 compared to what they would have paid without reform.

Businesses will NOT suffer under health reform