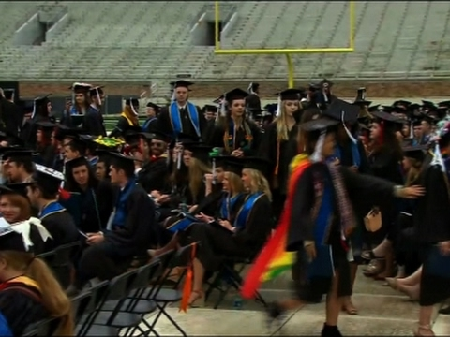 Mike Pence, the 48th Vice President of the United States of America, serving under President Donald Trump was at the receiving end of students’ wrath recently.

A minor group of students removed themselves from the graduation ceremony during Spence’s commencement speech.

The Vice President was asked by Notre Dame to deliver the main speech at its graduation, much to the chagrin of some of the members of the 2017 graduating class.

As soon as the Pence stepped up to the lectern, a group of students got up and walked out.

According to press reports, the students had planned the walkout in protest against the Trump administration and its policies against minority and the marginalized.

Pence carried on while the students walked out like nothing happened.

He fired up the audience and even got some cheers.

Pence graduated from Hanover College with a bachelor’s degree in history in 1981. After earning his law degree at Indiana University School of Law, he practiced law, led the Indiana Policy Review Foundation.

In 2000, Pence won a local congressional seat and went on to get elected six times to represent the East-Central Indiana constituents in Congress.