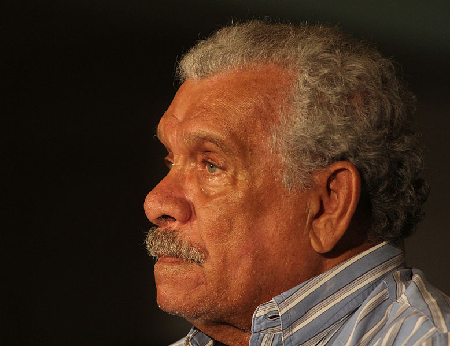 Nobel Prize-winning poet Derek Walcott has died after a long illness at his home in the eastern Caribbean island of St. Lucia at the age of 87.

The renowned poet, playwright, painter, journalist, and professor has received praise from many of his contemporaries  including Robert Graves, who wrote that Walcott “handles English with a closer understanding of its inner magic than most, if not any, of his contemporaries.”

Additionally, Joseph Brodsky said of Walcott, “For almost forty years his throbbing and relentless lines kept arriving in the English language like tidal waves, coagulating into an archipelago of poems without which the map of modern literature would effectively match wallpaper. He gives us more than himself or ‘a world’; he gives us a sense of infinity embodied in the language.”

Walcott was born and raised in Castries, the capital of Saint Lucia, in the West Indies with a twin brother, playwright Roderick Walcott, and a sister, Pamela Walcott.

He was born on January 23, 1930, to a Methodist schoolteacher mother and a civil servant father, an aspiring artist who died at age 31 before Walcott and his twin brother were born.

His mother, Alix, instilled the love of language in her children, often reciting the works of William Shakespeare and reading aloud other classics of English literature.

At the age of 14, Walcott published his first work, a 44-line poem called “1944”, in a local newspaper. About four years later, while still in his teens, he self-published a collection of 25 poems. At 20, his play “Henri Christophe” was produced by an arts guild he co-founded.

He later moved on to study literature at Jamaica’s University College of the West Indies. In the 1950s, he studied in New York and founded a theater in Trinidad’s Port-of-Spain, a Caribbean capital he mentioned with great warmth during his Nobel lecture in 1992.

Walcott published more than thirty plays, the majority of which have been produced by the Trinidad Theatre Workshop and have also been widely staged elsewhere. Many of them address, either directly or indirectly, the liminal status of the West Indies in the post-colonial period. Through poetry, he also explores the paradoxes and complexities of this legacy.

Some of his acclaimed works include the book-length poem Omeros, plays, “Dream on Monkey Mountain,” and “The Last Carnival.”

Apart from the Nobel Prize in Literature, Walcott received many other awards and honor including Anisfield-Wolf Book Award for Lifetime Achievement, Honorary doctorate from the University of Essex, T. S. Eliot Prize (for poetry collection White Egrets), OCM Bocas Prize for Caribbean Literature (for White Egrets) Griffin Trust For Excellence In Poetry Lifetime Recognition Award, and Knight Commander of the Order of Saint Lucia.

Walcott retired from teaching at Boston University in 2007 and moved back to his home country, St. Lucia.