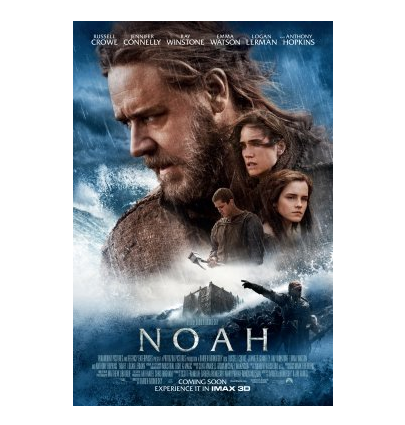 The 2014 American epic biblical-inspired film, Noah, directed by Darren Aronofsky and Ari Handel is based on the Old Testament story of “Noah and the Flood,” the film stars Russell Crowe as Noah along with Jennifer Connelly, Ray Winstone, Emma Watson, Logan Lerman, Anthony Hopkins, and Douglas Booth.

The film depicts the story of a world ravaged by human depravity and the mercy and judgement of God. It recounts from the Bible one man’s divine mission to build an Ark to save creation from an apocalyptic flood.

This is not a movie to go to for an accurate description of the biblical story neither is it a call to bible study nor prayer meeting.

That said, it is good drama and entertainment and ought to be viewed within  that context.

Some Christians would no doubt view the movie as an opportunity to engage people in a productive conversation on: What is the story of Noah? What is the story of the flood? Was the flood world-wide or global? Is there a difference? Who were the watchers? What is the link between this Old Testament  story and references to other books of the Bible.

On the other hand, others would see the film as troubling given its deviation from the scriptural text.

In fact, the film has already received some push back from a number of religious groups which have vowed to boycott the movie because of its inaccurate representation of the biblical story.

However, being mindful of the possible backlash Paramount Pictures made sure to add the disclaimer: “The film is inspired by the story of Noah. While artistic license has been taken, we believe that this film is true to the essence, values and integrity of a story that is a cornerstone of faith for millions of people worldwide. The biblical story of Noah can be found in the book of Genesis.”

Notwithstanding, the film has been banned by the governments of various Islamic countries such as Malaysia, Pakistan, Qatar, Indonesia and others. The portrayal of prophets such as Noah and others in movies is deemed as a violation of Islamic laws.

At the same time, critics have applauded the film as being an exciting and powerful production. It has a 78% ratings among top critics on Rotten Tomatoes with a critical consensus saying, “With sweeping visuals grounded by strong performances in service of a timeless tale told on a human scale, Darren Aronofsky’s Noah brings the Bible epic into the 21st century.”

The film, however, is not without negative feedback from critics, these include among others Chicago Tribune’s Michael Phillips who gives the film two-and-a-half stars out of five, noting that it mostly works because “although the director has a habit of letting the internal momentum of his dialogue scenes putter and then stall, his penchant for tight hand-held close-ups maintains a crude, heightened realism.” Also, “a roiling Cain/Abel dynamic between the older boys” is particularly affecting and, like McCarthy’s review, that the animals themselves are rarely a factor of the “erratic” and “unpredictable” flood film.

Consistent with this, Ty Burr of the Boston Globe says the film is “equal parts ridiculous and magnificent.” He also notes that Crowe “turns out to be perfectly cast in the title role,” he writes, “The parts of ‘Noah’ that don’t work really, truly don’t. But the parts that do almost sweep you away in the flood.”