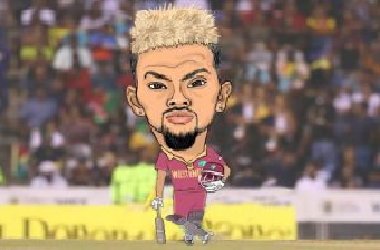 Nicholas Pooran oozes class in a 45-ball century knock — the third fastest in the tournament’s history and the first of his T20 career.

The Windies rising star whose play is dubbed the ‘next big thing’ in West Indies Cricket was on a rampage, smashing the ball to all parts of the ground in the Caribbean Premier League (CPL) contest against St Kitts & Nevis Patriots at the Queens Park Oval.

The Amazon Warriors won the toss and inserted the opposition St Kitts & Nevis Patriots into bat.

The Patriots struggled to put runs on the board, and in the middle of their inning were 59 for 3.

Ramdin and Da Silva later provided momentum, but the team could only manage 150 for 5, which on the face of it seemed to be an on-par score.

However, the Amazon Warriors made a mockery of the score at their turn to the bat, losing only three wickets as King, Hetmyer, and Sinclair failed to impress with the bat.

On the other hand, Pooran hammered the bowling all over the park, hitting 10 (sixes) and 4 (fours) with a strike rate of 222.22, scoring a century in his 45-ball knock to win the man of the match.

In his post-match remarks, Pooran said, “I want to thank my parents, my girlfriend and [team physio] Jason Pilgrim. He worked with me tremendously hard in the last five months. I was just patient today. It’s a tough tournament. Hopefully, today can trigger things for my team today, confidence-wise. We were just trying to build a partnership and keep the required run-rate under 10. For the last two years, I haven’t been finishing games, but I wanted to do it today when it mattered the most for our team. When I saw Ish Sodhi come back to bowl, I backed myself [for the hundred].”