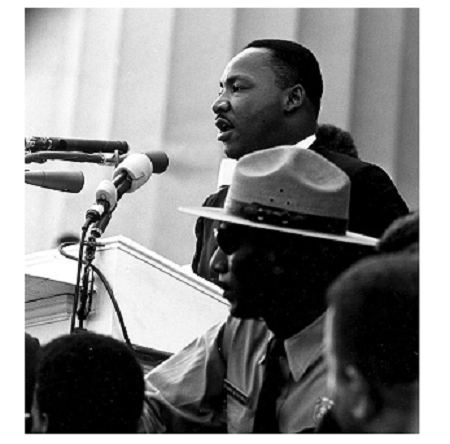 NYU marks the celebration this year of Martin Luther King, Jr. week with the theme “There Comes A Time…”

This will be the eleventh year since the University has started the celebration of MLK week.

The events for the week are set to start February 1 and will continue to February 6.

He was a leading American Baptist minister, activist, humanitarian, and leader in the African-American Civil Rights Movement. He is best known for his role in the advancement of civil rights using nonviolent civil disobedience based on his Christian beliefs.

Dr. Martin Luther King, Jr. delivered a speech on the campus of New York University on February 10, 1961; he was the 32 years old at the time of his address.

His speech entitled, “The Future of Integration,” advocated for civil rights and nonviolent protest for social change.

He argued then that “Human progress is neither automatic nor inevitable… Every step toward the goal of justice requires sacrifice, suffering, and struggle; the tireless exertions and passionate concern of dedicated individuals.”

Dr. King, in one of his famous speeches and one that came to be regarded as one of the finest speeches in the history of American oratory, entitled “I Have a Dream,” uttered the following words which continue to serve as inspiration for many people:

“I say to you today, my friends, so even though we face the difficulties of today and tomorrow, I still have a dream. It is a dream deeply rooted in the American dream.

I have a dream that one day this nation will rise up and live out the true meaning of its creed: ‘We hold these truths to be self-evident: that all men are created equal.’

I have a dream that my four little children will one day live in a nation where they will not be judged by the color of their skin but by the content of their character.

I have a dream today.

I have a dream that one day, down in Alabama, with its vicious racists, with its governor having his lips dripping with the words of interposition and nullification; one day right there in Alabama, little black boys and black girls will be able to join hands with little white boys and white girls as sisters and brothers.

I have a dream today…”

The NYU community is seeking to continue Dr. King’s legacy by reflecting on his work and continue the conversation around action and moreover mobilize its community to live beyond the dream of Dr. King.

The university community will celebrate the 11th Annual NYU MLK Week, with a number of different activities on campus.