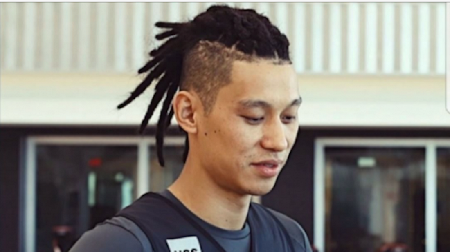 Jeremy Shu-How Lin, no stranger to stirring up a sensational conversation, has done it again, albeit this time a controversy of sort off the courts.

Lin, who now plays for the Brooklyn Nets has not had a stellar start with his new team as he had suffered from a hamstring strain which has put a hiccup on his game.

Now, who can forget the winning turnaround he led the New York Knicks  during the 2012 season, which generated a global craze known as “Linsanity.”

Today, Lin is again in the spotlight and this time for his hairstyle.

The fact is he has sported various hairstyles since he assumed stardom on the basketball courts, but this time, it’s off the chart — he is now sporting dreadlocks, a hairstyle popularized by Jamaica’s Rastafarians sect and in particular reggae icon Bob Marley.

This new move by Lin, the Asian-American and Brooklyn Net’s point guard, has raised the ire of many people and former NBA player in particular — Kenyon Martin.

In an Instagram video post, Martin accused Lin of wanting to “be black” and said in a caption that he was “disappointed in his teammates and the Nets as an organization for allowing this foolishness.”

Additionally, Martin suggested that had Lin entered the locker room of one of his teams, the message would have been quite clear.

“Do I need to remind this damn boy that his last name is Lin?” Martin said in the video. “Like, come on man. Let’s stop this, man, with these people, man. There is no way possible that he would have made it on one of our teams with that bulls–t goin’ on in his head. Come on man, somebody needs to tell him, like: ‘All right bro, we get it. You wanna be black.’ Like, we get it. But the last name is Lin.”

Lin, however, in his response, took the high ground by pointing to the Chinese character tattoos that Martin wears on his arm and conclude that’s it’s okay for Martin not to like his hairstyle.

“Hey man, it’s all good. You definitely don’t have to like my hair and [you are] definitely entitled to your opinion,” Lin wrote.

“Actually I [am] legit grateful [for] you sharin it [to be honest]. At the end of the day, I appreciate that I have dreads and you have Chinese tattoos [because] I think its a sign of respect. And I think as minorities, the more that we appreciate each other’s cultures, the more we influence mainstream society. Thanks for everything you did for the Nets and hoops . . . had your poster up on my wall growin up,” he added.

Martin, subsequently, decided to clear the air by stating in an interview that his comments were never meant to be racial and ‘twas just a matter of poking fun at Lin — “It was meant to be a ‘Ha Ha Ha’ moment.”

Additionally, he said that he’s sent Lin a direct message and is trying to get his number so as to“clear the air.”

At the same time, Lin, in defense of his new hairstyle argued the following on the Players Tribune:

Friends would say things like, “Bro, what about appropriation?”

“I’ll be honest: At first I didn’t see the connection between my own hair and cultural appropriation. Growing up, I’d only ever picked from one or two hairstyles that were popular among my friends and family at the time. But as an Asian-American, I do know something about cultural appropriation. I know what it feels like when people get my culture wrong. I know how much it bothers me when Hollywood relegates Asian people to token sidekicks, or worse when it takes Asian stories and tells them without Asian people. I know how it feels when people don’t take the time to understand the people and history behind my culture. I’ve felt how hurtful it is when people reduce us to stereotypes of Bruce Lee or “shrimp fried rice.” It’s easy to brush some of these things off as “jokes,” but eventually they add up. And the full effect of them can make you feel like you’re worth less than others, and that your voice matters less than others.”

Furthermore, he stated that the process started out being about the hair but panned out to mean more and of greater significance for him as he seeks to learn more about the African-American culture.