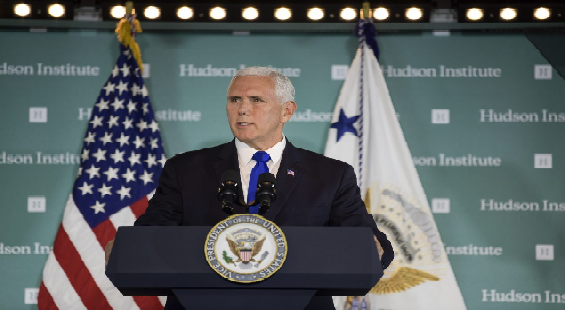 U.S. Vice-President Mike Pence has recently criticized the U.S. National Basketball Association (NBA) in a speech in which he also attacked Chinese diplomatic and trade policies.

He accused both the NBA and the sports firm Nike of “kowtowing” to Beijing and “muzzling” criticism of China.

Mr. Pence’s angst comes against the background of a tweet from Houston Rockets general manager Daryl Morey, who expressed support for the Hong Kong protesters.

This move prompted a huge Chinese backlash, which forced the NBA to release a statement distancing itself from Mr. Morey’s tweet.

Mr. Pence accused the Chinese government of trying to “influence the public debate here in America” by “trying to export censorship.”

The fact of the matter is the U.S. has been kowtowing to China for years and has rarely sought to punish China for human rights violations the way they would, for example, Venezuela and Cuba.

China is renowned for violating the freedoms of speech, movement, and religion of its citizens and others within its jurisdiction over a long period of time.

According to the Amnesty International report from 2016/2017, the Chinese government continued to draft and enact a series of new national security laws that presented severe threats to the protection of human rights.

Many U.S. companies over the years have continued to turn a blind eye against grave human rights violations in China.

“Nike promotes itself as a so-called ‘social-justice champion,’ but when it comes to Hong Kong, it prefers checking its social conscience at the door,” said Mr. Pence.

However, this could be said about many other major U.S. companies operating in China.

This action, of course, is what heartless capitalism looks like — corporate greed at all costs.

So, some companies will not only exploit workers but also support any regime that supports their profiteering quest.

This neo-class buccaneering will continue so long as governments and companies continue to value material resources over human resources.

People are still waiting to hear whether human rights are part of that much- touted trade deal between the Trump administration of which Pence is a member and China.

I wouldn’t hold my breath, and you shouldn’t.

Indeed, a topsy-turvy world, if ever there was one!