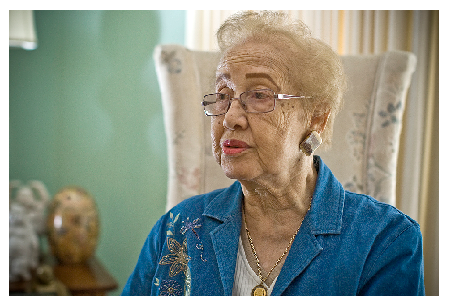 The following is a statement from NASA Administrator Charles Bolden about former NASA mathematician and physicist Katherine Johnson being awarded the Presidential Medal of Freedom Tuesday:

“Katherine Johnson once remarked that even though she grew up in the height of segregation, she didn’t think much about it because ‘I didn’t have time for that… don’t have a feeling of inferiority. Never had. I’m as good as anybody, but no better.’”

“The truth, in fact, is that Katherine is indeed better. She’s one of the greatest minds ever to grace our agency or our country, and because of the trail she blazed, young Americans like my granddaughters can pursue their own dreams without a feeling of inferiority.”

“The entire NASA family is both proud of and grateful to Katherine Johnson, a true American pioneer who helped our space program advance to new heights, while advancing humanity’s march of progress ever forward.”

The following is a statement from NASA Deputy Administrator Dava Newman:

“The reach of Katherine Johnson’s leadership and impact extends from classrooms across America all the way to the moon. Katherine once remarked that while many of her colleagues refrained from asking questions or taking tasks further than merely ‘what they were told to do,’ she chose instead to ask questions because she ‘wanted to know why.’

“For Katherine, finding the ‘why’ meant enrolling in high school at the age of 10; calculating the trajectory of Alan Shepard’s trip to space and the Apollo 11’s mission to the moon; and providing the foundation that will someday allow NASA to send our astronauts to Mars. She literally wrote the textbook on rocket science.”

“Katherine was born on National Equality Day. Few Americans have embodied the true spirit of equity as profoundly or impacted the cause of human exploration so extensively. At NASA, we are proud to stand on Katherine Johnson’s shoulders.”