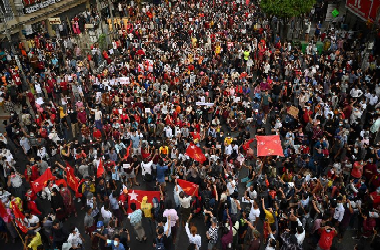 As protesters continue to make their voices heard on the streets of Myanmar, the police have become more aggressive in quelling the protest.

According to press reports, police have fired on protesters killing at least 18 people.

Deaths were reported in several cities including Yangon, Dawei, and Mandalay as police used live rounds and tear gas.

The United Nations Human Rights Office condemned the violence against protesters, saying it had “credible information” that at least 18 people had been killed and more than 30 others have been injured.

“The people of Myanmar have the right to assemble peacefully and demand the restoration of democracy,” spokesperson Ravina Shamdasani said. “Use of lethal force against non-violent demonstrators is never justifiable under international human rights norms.”