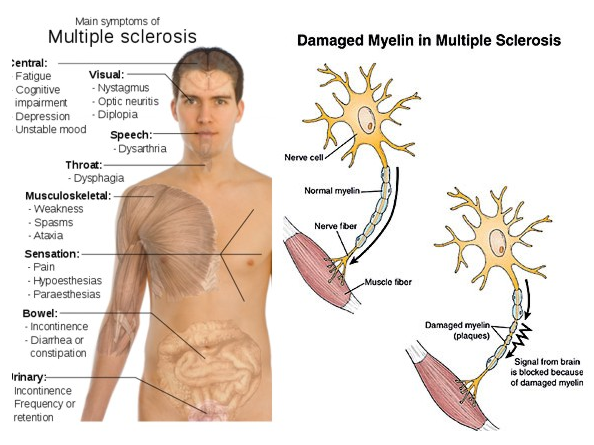 According to mayoclinic.org, Multiple sclerosis (MS) is a disease in which one’s immune system attacks the protective sheath (myelin) that covers the nerves. Myelin damage disrupts communication between one’s brain and the rest of one’s body. Ultimately, the nerves themselves may deteriorate a process that’s currently irreversible.

The signs and symptoms of MS vary widely, depending on the amount of damage and which nerves are affected.

There’s no cure for multiple sclerosis. However, treatments can help speed recovery from attacks, modify the course of the disease and manage symptoms.

Most people with MS have a relapsing-remitting course, with new symptoms (relapse) that develop over days or weeks and usually improve partially or completely, followed by a quiet period (remission) that can last months or even years. Small increases in body temperature can temporarily worsen signs and symptoms of MS, but that type of event isn’t a relapse.

Some people with MS experience a gradual onset and steady progression of signs and symptoms with no relapses (primary-progressive MS).