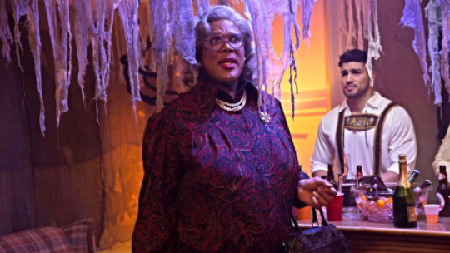 Boo! A Madea Halloween, the American comedy horror film written, directed, and co-produced by Tyler Perry is creating waves in cinemas throughout the U.S.

The film which Tyler also stars in took home $27.6 million on its opening weekend at the box office.

The idea for the film originated from a fictitious Madea Halloween movie that was mentioned in Chris Rock’s 2014 film, Top Five.

It is the eighth in the Madea series, and the second Madea film (the first being Madea’s Witness Protection) to not be adapted from a stage play. The film was released on October 21, 2016 by Lionsgate.

The new comedy has beaten Tom Cruise’s latest Jack Reacher movie to the top of the US box office.

Jack Reacher: Never Go Back, the second film in the franchise, debuted at number two with $23 million.

Last week’s number one, The Accountant, dropped to number four after taking a further $14 million