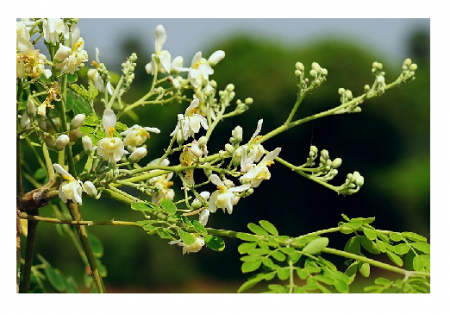 The Himalayas, consists of not only some of the highest mountain peaks in the world including Mount Everest but also its varied climate, rainfall, altitude, and soil make it the home of a wide range of flora and fauna not found anywhere else.

Now, native to the southern foothills of the Himalayan Mountains is an acclaimed plant known as Moringa oleifera, referred to as nature’s “miracle tree.”

Today, although the plant is grown in many different countries and known by different names, India is by far is still the largest producer of the plant.

The tree is cultivated for its leaves, pods, and/or its kernels for oil extraction and water purification.

Although many parts of the plant are edible, its regional uses vary depending on the country. For example, the immature seed pod, popularly referred to as “drumsticks” are widely used in Africa; however, the leaves are the preferred choice of use in countries such as Cambodia and the Philippines.

Moringa oleifera is said to be packed with over ninety verifiable, cell-ready vitamins, minerals, proteins, antioxidants, omega oils, and a wide range of other nutritional benefits.

Gram for gram, the fresh moringa leaves are said to contain:

Four times the Calcium of milk

Three times the Potassium of bananas

Two times the Protein of yogurt

Four times the Vitamin A of carrots

Moreover, it is claimed that the plant offers the following health benefits:

The tree is also said to contain Vitamin B1, Vitamin B2, Vitamin B3, chromium, copper, fiber, iron, manganese, magnesium, phosphorus, potassium, and zinc.

Currently, many Non-Government Organizations (NGOs) have advocated for the use of Moringa to not only combat malnutrition but also to be used as a main staple within the tropics.

According to an author who writes on health issues, “The nutritional properties of Moringa are now so well-known that there seems to be little doubt of the substantial health benefit to be realized by consumption of Moringa leaf powder in situations where starvation is imminent.”