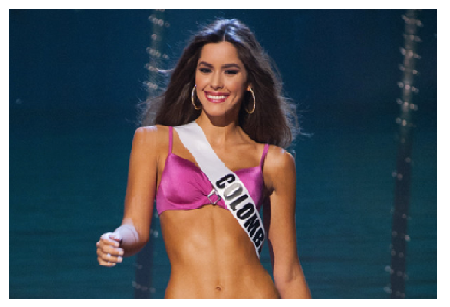 Miss Colombia Ariadna Gutierrez has lent her voice to the public’s ear after the Miss Universe 2015 controversy on Sunday, December 20 — thanking supporters and accepting her unfortunate fate.

The 21-year-old beauty queen has gained the unenviable reputation of being the shortest reigned Miss Universe in the history of the competition.

Her momentary reign came about when host Steve Harvey awarded her the title of Miss Universe 2015 by reading the wrong name off the results card during his now-infamous television gaffe.

However, despite the malice and vexation of spirit from many quarters as well as protests, calls, and wishes by many pundits, commentators, including Miss Germany, and the President of Colombia, Juan Manuel Santos, for Gutierrez to be bestowed the winner; the beauty queen declared herself as being at peace with the situation — a touch of class from a beautiful soul.

“After the storm comes the calm,” said the fabulous damsel in a note on Instagram, “I want to thank each and every one of you who have sent messages of support and strength. Every one of you has become an incredible human being in my book and I am the most fortunate and thankful for having the support not only from one country but from the whole entire world,” she added.

“Your destiny is written for you. And my destiny was this. I was able to bring happiness to my country after becoming Miss Universe for only a couple of minutes… Today because of that COLOMBIA and the LATIN COMMUNITY are being talked about in every corner of the world. I also want to congratulate the Philippines for their new Miss Universe,” she continued.

She also had good wishes for Pia Alonzo Wurtzbach, the crowned Miss Universe.

“The happiness that you must be feeling must be incredible. Life continues and in the future we will find out why things happen the way they happen. Thank you all for your LOVE SUPPORT and KINDNESS.”

Harvey, in the meantime, had earlier apologized to Gutierrez via Twitter. “I’d like to apologize wholeheartedly to Miss Colombia and Miss Philippines for my huge mistake. I feel terrible,” he stated.