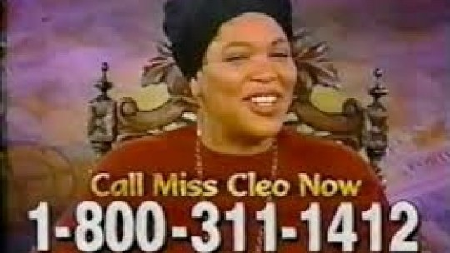 Youree Dell Harris, the 53-year-old American television personality who was best known as Miss Cleo, a spokeswoman for a psychic pay-per-call service died on Tuesday after a battle with cancer.

She suffered from colon cancer that eventually spread to her liver and lungs.

The iconic television psychic, famous for her thick Jamaican accent, urged viewers to call her hotline and get an insight into the future with the catchphrase, “Call Me Now!”

Despite the accent, and the Jamaican heritage claims, Harris was born in Los Angeles on August 12, 1962, and raised in a Catholic Caribbean family.

Her memorable Miss Cleo persona ran in television ads from 1997 to 2003.