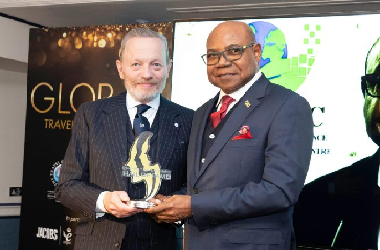 Jamaica’s Minister of Tourism, Hon. Edmund Bartlett yesterday (April 28) joined an esteemed group of high achievers in the international travel and hospitality industry, with his induction into the prestigious Global Travel Hall of Fame.

The Global Travel Hall of Fame, formerly dubbed The British Travel and Hospitality Hall of Fame, “recognizes the highest achievers in the travel, hospitality, tourism and leisure sectors.” Inductees are also hailed as having not only “achieved phenomenal business success but have also inspired and shaped those around them.” Minister Bartlett is the first Caribbean tourism leader to receive this honor.

The elaborate induction ceremony was held at The Chesterfield Hotel in London. The British Travel and Hospitality Hall of Fame was acquired by Jacobs Media Group in 2014. However, the event was later forced to take a break during the COVID-19 pandemic and was subsequently renamed.

Minister Bartlett said he was “humbled by the recognition” which follows a stream of other worldwide industry awards bestowed upon him. “It is really a humbling experience to be recognized in this manner and to be included as a member of such as revered group, more so because it recognizes not just my own contribution to the sector, but the fact that Jamaica stands out as a prime example of what can be achieved in tourism,” expressed Minister Bartlett.

He has also given credit to the team that he leads in the Ministry of Tourism and its public bodies, describing members as “very dedicated and hardworking public sector workers who appreciate the significance of what they do to the success of tourism and its important contribution to the Jamaican economy.” Minister Bartlett also lauded tourism stakeholders across the island for their contribution and support as partners in developing the sector over the years.

In 2018 the Pacific Area Travel Writers’ Association (PATWA) named Mr. Bartlett Minister of the Year for Sustainable Tourism. In 2019 he was presented with the TRAVVY Awards inaugural Chairman’s Award for Global Tourism Innovation for the development of the Global Tourism Resilience and Crisis Management Centre (GTRCMC). He also received the prestigious Gusi Peace prize from the Gusi Foundation in 2020.

Earlier this month Minister Bartlett was also named among 50 global icons of travel and tourism “who have innovated and created new benchmarks in the travel, aviation, tourism, hospitality and allied sectors.”

Under his leadership, Jamaica has seen its all-important tourism industry bouncing back from the ravages of the COVID-19 pandemic and on its way to equaling pre-pandemic record figures for arrivals and earnings.