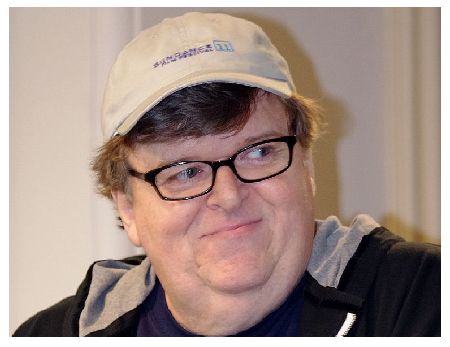 Michael Moore, the American documentary filmmaker, screenwriter, author, journalist, actor, and left-wing political activist has been forced to put all his activities on hold due to pneumonia complications.

He has had to cancel all promotional stops for his new movie, “Where To Invade Next,” including appearances on Conan O’Brien and Bill Maher’s shows.

In a press release Moore note the following:

“I have to be honest, with my absence. . . I’m now worried about my film’s release,” Moore posted on Facebook.

I’m writing this to all of you today (Thurs) from the Intensive Care Unit at a hospital in New York City. Unfortunately, I’ve come down with pneumonia. Between running all over the place lately promoting my new movie (WHERE TO INVADE NEXT), plus going to Flint to help the people of my hometown, plus jumping in to support Senator Sanders, plus doing a dozen other things — well, I read somewhere you can’t burn it at both ends, and if u do, it’s best not to do so in the winter nor anywhere near a place full of toxic water!

The truth is, I’ve actually been in the ICU since Sunday night. Let’s just say things didn’t look good Sunday night. But thanks to a combination of good doctors, decent hospital food and 2nd-term Obamacare, I’m doing much better the last couple of days — so much so that I’m being discharged later today. I’m to return home and rest for the coming days. All appearances for the rest of this week have been canceled.

Needless to say, in addition to being a bummer health-wise (and I’m trying out a new thing this week by putting that, my health, first), this is a huge loss to my efforts in leading up to the release of my new movie next Friday. I was supposed to be in LA tonight (Thurs) to be on Conan, and tomorrow night I was making my return after two years to the Bill Maher show on HBO (and thank you, Erin Brockovich, for going on in my place to talk about the situation in Flint!).

Since I mentioned my predicament earlier today on Twitter and Facebook (or perhaps you heard about it in the media http://detne.ws/1T1Dtjs), many of you have sent me very nice well wishes (thank you!) and have asked if there’s anything you could do to help me. Actually, there is.

I have to be honest, with my absence this week (and probably into next), I’m now worried about my film’s release. I can’t fly, I have to recover, and in one week (February 12th) this great movie I’ve put so much of my life into is going to open in theaters — with little or no assistance from me. So, would it be OK to enlist your help in a sort of quickly cobbled-together “army” of grassroots foot soldiers, wherein you could pitch in where you live (and on socila media) to let people know about my movie? I could post some ideas tomorrow of things you and your friends could do. Things like:

— send around the movie’s poster (see below);

— show or place the 30-second ad wherever you can ;

— forward reviews of the film to friends and family .

I know this seems a bit unorthodox, and I’ve never seen a request like this made before by a director (then again, I could just be on the wrong drugs), but this is the age of social media and we’re all trying lots of new ways to do things, aren’t we? So why not just appoint each of you as the local PR person for WHERE TO INVADE NEXT, seeing how I can’t make it there in person? This will take a HUGE burden off me and give the movie a chance to be seen by millions.

My other problem is that the distributor hired to release the film is a new start-up company still in formation (the company doesn’t even have a name yet). So their plan all along was essentially to have me do most of the work by running back and forth across the country doing interviews and screenings. Naturally, I loved this plan, but none of us stopped to think what would happen if… I got pneumonia! So, they’re doing their best now (these are the brave people who worked on the release of the Edward Snowden documentary, “Citizen Four”). If a few thousand of you suddenly became champions and spokespeople for the film, then maybe I/we can pull this off. I would be forever in your debt.

I do need to get some sleep, so I’ll sign off for now. Check back with me tomorrow (Friday) for further updates and ideas. Thanks for offering to help. Stay warm, drink plenty of fluids, and let’s get back to our nightly walks!