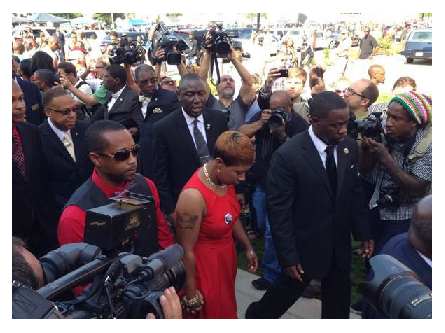 Three things cannot be long hidden: the sun, the moon, and the truth.

Michael Brown, an unarmed black teenager who was fatally shot earlier last month by white police officer Darren Wilson, has not only evoked a loud public outcry but also provoked heated debates across the racial divide as well as among media pundits.

According to news report, Ferguson police responded to a call about a robbery at a convenience store. Following the lead of the dispatcher, the police officer encountered Michael Brown and his friend, Dorian Johnson.

Both men were ordered to move off the street onto the sidewalk by the police officer. An altercation took place later between Brown and police officer Wilson and before long Brown was dead.

There is now strong dispute about how Brown met his death. In a news conference, the St. Louis County Police Chief Joe Belmar reportedly said Brown physically assaulted the officer, and during a struggle between the two, Brown reached for the officer’s gun. One shot was fired in the car followed by other gunshots outside of the car.

However, witness reports vary greatly as it claims that Brown was standing with his hands up when he was shot multiple times by Wilson.

The aftermath is the fatal shooting of Brown has led to serious unrest and tension between the black-majority community and a predominantly white-city government and police force.

For more than a week there have been daily protests, vandalism, looting, shooting, robbery, injuries, and nightly curfew within the Ferguson community.

On August 20, a grand jury was set to begin hearing evidence in the shooting incidence. The grand jury will decide “whether a crime was committed and whether there is probable cause to believe the defendant committed it.”

The grand jury is made up of a 12-member panel. This includes three black (one black man and two black women) and nine white members (six white men and three white women).

Now the public awaits the outcome of this case with bated breath.