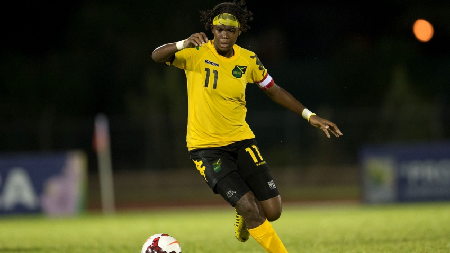 To be young, gifted and black,

Oh, what a lovely precious dream

To be young, gifted and black,

Open your heart to what I mean

Shaw honed her skills while attending St. Jago High School where she scored over 100 goals and offered numerous assists. She also helped her school to championship after a ten-year drought.

Since then, she has gone on to establish herself as one of the nation’s top female players.

In 2014, she captained the national Under-17s and helped the Under-20s to the Caribbean Football Union (CFU) titles and the CONCACAF final rounds.

She later moved on to Florida State College where she commanded the attention of coach and fans by scoring goals at will or assisting teammates to do so.

Shaw soon grabbed the attention of University of Tennessee head coach Brian Pensky and was drafted into UT soccer team – The Vols.

“Playing football in the US on a whole is a different experience; they play much quicker, they are faster, they think better on the ball and being in that type of environment will prepare me for college (football). I just want to play to the best of my ability and go for the best at all times and try to do well in school, so, of course, I know I can be a success,” said Shaw in a press report.

Already, Shaw has made her presence felt on the pitch at Tennessee.

The first-team All-SEC selection has a team-leading 16 points for UT (9-1-1, 3-1) in only seven games this season. Four of Shaw’s team-leading seven goals have been game-winners.

However, as the Lady Vols prepare for a crucial three-game stretch against rivals Florida, Vanderbilt and Georgia, they will have to make do without Shaw as she will suit up for Jamaica’s National Football team — the Reggae Girlz.

A win for the Reggae Girlz against the U.S. will see them qualify for a historic berth in the 2019 FIFA Women’s World Cup in France.

A loss would mean Jamaica would go to the third-place playoff and take on the loser of Canada versus Panama clash on Wednesday.

The winner there will qualify for the women’s World Cup while the loser would take on Argentina in an intercontinental playoff in November.

Jamaica will be looking to be the first Caribbean team to qualify for the FIFA Women’s World Cup with Shaw’s help.

That said, Shaw left the Lady Vols on a high note, recording the second hat trick of her UT career in Tennessee’s in a 3-1 win over Kentucky.

“It is pretty hard because by me not being there I know the girls are a little bit disappointed. But me not playing for my country would make my family disappointed. I am in between both,” said Shaw in a report.

She added, “But I feel like this is an opportunity I can’t miss. It’s a chance for me to show the world what I can do.”

Shaw has also had difficulties growing up in Spanish Town, one of Jamaica’s crime-plagued areas.

“Nobody can imagine, or dream of the things Bunny has been through in her life,” coach Pensky said in a press report. “(Three) of her brothers have been murdered. A cousin has been electrocuted. In August one of her cousins was shot in his driveway back home.”

There is no stopping, however, of this young solid 5-foot-11 Jamaican Reggae Girlz midfielder/defender on the football pitch.

Should “Bunny” get a chance to showcase her craft on the 2019 World Cup stage in France, she is bound to be recognized as one of the best footballers in the World.