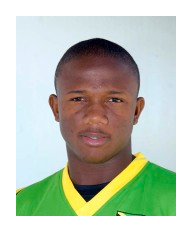 In the game of cricket, batting is rated and regarded as the highest skill set.

In order to acquire and master this skill, one must not only display excellent batting technique that is proper coordination and movement of the hands, feet, head, and body in the execution of cricket shots, but most importantly, possess the ability to think.

Now, Jamaica’s young batsman, Andre McCarthy has not only been showing signs of possessing these qualities, but also got cricket aficionado talking about his prowess with the bat.

McCarthy at age 28 has been around cricket for a long time, but over the years since he has started playing senior cricket his performance at best may be described as tepid.

This has been rather disappointing for those whom have watched his progress or lack thereof over the years.

The fact is the former Holmwood Technical High School and G.C. Foster College graduate showed tremendous promise with the bat during his formative cricket years, but somehow never managed to make that batting transition to the senior level until now.

He made his first class debut playing for Jamaica against the Combined Campuses and Colleges in April 2013. He scored then 46 and 16 runs, respectively. He also made his Twenty20 debut in the same year against Windward Islands where he scored a paltry 19 runs. In addition, he made his List A debut against Barbados on Feb 7, 2013, but failed to impress with the bat.

This cricket season, however, McCarthy has begun to show that he is a class act whose time has come to prove to cricket fans and selectors at the highest level that he is ready to assume the mantle of the batting maestro that they have long known him to be when set.

He scored an impressive 92 runs against Windward Islands in the current regional four day tournament and followed this up with a brilliant 121 against Trinidad and Tobago, his highest first class score.

He is known as a prolific run getter at the local level. At the beginning of the season, he scored two centuries with his highest score, a whopping 174.

The Jamaican right-hand batsman and right-arm offbreak bowler was named the cricketer of the year by his local club.

Now, as the four-day regional tournament continues, cricket pundits and fans have begun to focus their attention on Andre McIntosh McCarthy and the question being asked is he the real Mckoy or do we look for another?

Time will no doubt tell, but for now, I am placing my bet on McCarthy as the next big batsman in cricket, if not for the West Indies, certainly for Jamaica.