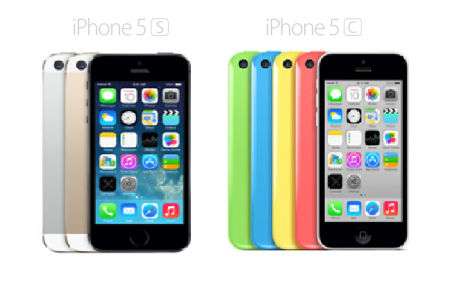 The unveiling of the new iPhone models – the high-end 5S and a cheaper version, the 5C, that comes with five different colors and a plastic back has received mix reaction in the media.

Here’s a selection of some of the media buzz online:

With its plastic back, the iPhone 5C was apparently going to be the most affordable iPhone yet. I personally wouldn’t call £469 “affordable”, but I suppose that depends on your outlook. It’s at least cheaper than the previous iPhone 5.

For the entire six year history of the iPhone, Apple has staunchly stuck to offering a single line of models at a time. While it has increasingly placed both old and new models on sale alongside one another in its offerings, there hasn’t been a true new tier of iPhones ever.
Market segmentation and expanding competition from Android devices in emerging markets have been pushing Apple towards this for some time. Creating a less expensive version of the blockbuster device will allow Apple to target localities where the subsidy model simply doesn’t work.

“It’s made with all the incredible technology of the iPhone 5,” said Phil Schiller, Apple’s marketing head, at the event.
Under the hood, the iPhone 5C sports the same A6 processor and memory as the iPhone 5S, with a slightly improved battery. Apple says it’s made out of a hardcoated polycarbonate, but that’s just a fancy way of saying “strong plastic.” Camera-wise, it keeps the iPhone 5′s 8 megapixel rear shooter but upgrades the front-facing camera to HD quality.

After months of speculation that Apple would release a budget model aimed at attracting customers in emerging markets, Chinese web users were quick to dismiss the iPhone 5C as too expensive.
“I thought the cheap 5C version would be priced at one thousand or two (yuan) … I can’t sell my kidney for this much,” said one poster on Sina Weibo, China’s hugely popular Twitter equivalent, referring to a teenager who sold a kidney to buy an iPhone and iPad last year.
“So this is the so-called cheap version? The 5C starts at 4,488 yuan in China. Haha, they treat the Chinese as peasants,” said another.