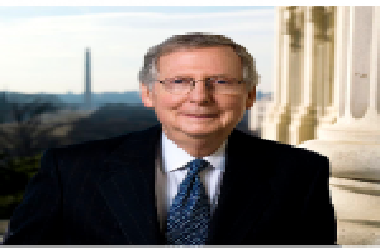 A law which President Biden called “Jim Crow in the 21st century.”

The Minority leader warned that companies “will invite serious consequences if they become a vehicle for far-left mobs to hijack our country from outside the constitutional order.”

The cynics among us would respond that politicians have already hijacked the country from the people to the extent that some were not willing to support a $2000 stimulus check to assist them in the COVID-19 financial meltdown.

The fact of the matter is McConnell and politicians of his ilk do not want another estate — corporation to rain on their parade when not invited.

So, the pushback is corporate America should focus on ‘return on investment,’ not exercise their social responsibility in the area of politics.

McConnell puffed, “So my warning, if you will, to corporate America is to stay out of politics,” he told reporters, “It’s not what you’re designed for. And don’t be intimidated by the left into taking up causes that put you right in the middle of one of America’s greatest political debates.”

The truth is politicians are prepared to fill their coffers with money from corporations and have them support their political campaigns but to engage in socio-political activities, that’s off the table.

This move also is similar to calls made by politicians, forbidding athletes and entertainers to engage in politics.

The fact is when the masses stay woke, politicians are held accountable, and their political shenanigans cannot be readily hidden under the radar.

Martin Luther King Jr. got it right when he challenges us to take a stance, quote, “The ultimate measure of a man is not where he stands in moments of comfort and convenience, but where he stands at times of challenge and controversy.”

Today, it is good to see companies, entertainers, and athletes taking a stance to identify with the cause of the minority and powerless.

It is by standing together in solidarity we’ll be able to engender a just and equitable society.

So, kudos to those companies for rallying against Georgia’s sinister move to cancel voters.