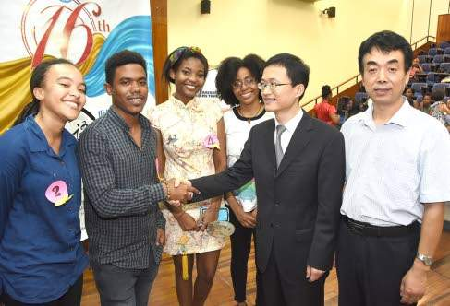 Yang Wen Xu (second right), counselor at the Embassy of the People’s Republic of China in Jamaica, congratulates Duncan Reid (second left), who topped the Chinese Proficiency Competition for Foreign College Students, and the other contestants who placed in the top four: (from left) Ariel Blackwood, Shanice Tomlinson, and Mia Fraser. At right is Professor Yu Wansuo, Chinese director at the Confucius Institute at The University of the West Indies (UWI).

The four will represent Jamaica at the world final scheduled for Beijing, China, in July. Eight Jamaican students — five from UWI and three from Caribbean Maritime Institute — entered the competition, which was organized to reward proficiency in Mandarin and improve communication between the peoples of Jamaica and China.

The competition, held last Saturday at UWI, featured a variety of formats — a written test, listening, speaking, reading, writing, translation skills, cultural knowledge, and talent performance. This was the second year that the competition, now in its 16th year globally, was held in Jamaica.