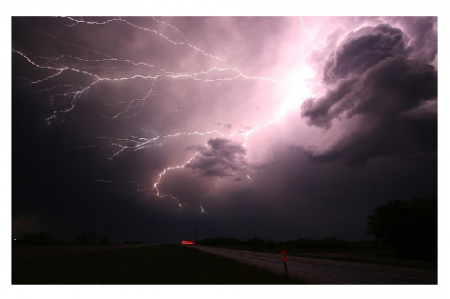 An Atlanta man can count his lucky stars to be alive today after lightning put a spoke in his step while he was getting ready to start work in his yard.

According to Press reports, Sean O’Connor was struck by a bolt of lightning with the sun being out and without any sign of thunder or lightning.

He told reporters that he wasn’t sure what had happened until he saw smoke coming from his shoes, it was only then that he realized that he had survived a lightning strike. “Just as I picked up the rake, I heard a loud crashing sound,” O’Connor told CBS46. “A few moments later I was picking myself up off the ground. I had the taste of blood in my mouth. I noticed my leg was burning a little bit.”

O’Connor was home alone. So, it took him a bit to realize what had just happened.

“My leg hairs were singed. I could smell the burnt hair,” he explained. “I looked across the driveway and I could see my boots over there. They were no longer on my feet, and one of them was smoking’. At that point I realized I had just been hit by lightning.”

O’Connor called his wife and shot cell phone video of the smoking boot and his bleeding tongue to prove to her he wasn’t kidding. He seems dazed in the video shot just moments after he came to.

She urged him to go to the emergency room right away.

“In my mind, I’d survived a lightning strike, and I didn’t think things could get any worse from there,” said O’Connor.

Because a lightning strike interrupts your own heart’s electrical system it caused O’Connor’s to beat irregularly. Doctors kept him overnight.

His kids think he’s pretty cool. And, while he’s taking the severity of it all in stride, he considers himself lucky.

“I’ve had a lot of friends comment and ask me if I can now bend spoons with my mind, which I don’t,” O’Connor said, smiling.

O’Connor said doctors pointed out to him that lightning doesn’t strike many people, about 1 in 700,000. And very few survive to tell the story like he did.