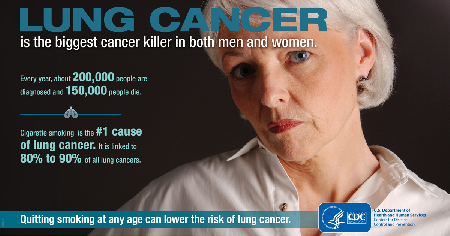 Cancer is a disease in which cells in the body grow out of control.

When cancer starts in the lungs, it is called lung cancer.

According to cdc.gov, Lung cancer is the leading cause of cancer death and the second most diagnosed cancer in both men and women in the United States.

However, there is good news, after showing increasing trends for decades, lung cancer rates have now shown a declining rate nationally, as a large number of people have given up the smoking of cigarettes.

Now, the question is often asked, what can one do to help lower one’s risk of lung cancer?

The Centers for Disease Control and Prevention has recommended the following:

The most important thing you can do to prevent lung cancer is to not start smoking, or to quit if you smoke.

Smoke from other people’s cigarettes, pipes or cigars is called secondhand smoke. Make your home and car smoke-free.

3. Get your home tested for radon.

The second leading cause of lung cancer is radon, a naturally occurring gas that comes from rocks and dirt and can get trapped in houses and buildings.

Here are some Facts:

3. When a person breathes in secondhand smoke, it is like he or she is smoking. In the United States, about 7,300 people who never smoked die from lung cancer due to secondhand smoke every year.