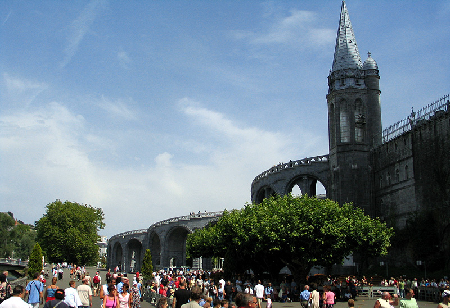 The nineteenth century has been considered by Catholic theologians as the “Age of Mary”.  Marian apparitions took place at Rue du Bac, Paris, France (1830), La Salette, France (1846), Lourdes, France (1858), and Knock, Ireland (1879).  For many Catholics, Lourdes, France is the most famous and frequently visited Marian shrine in the world.

Lourdes, which is an approximately 5-hour express train ride from Paris Montparnasse, lies in the foothill of the Pyrenees.

It is where the Blessed Virgin Mary appeared to a 14-year-old peasant girl, Bernadette Soubirous, at the Grotto of Massabielle 18 times between 11 February and 16 July 1858.

It was on the third apparition that the Lady asked Bernadette to come to the grotto for a period of 15 days.  On March 25th, the feast of the Annunciation, the Lady identified herself as “The Immaculate Conception.”

Since then, millions of pilgrims from around the world have gone to Lourdes for physical and spiritual healings.  Miraculous cures have been attributed to the healing powers of the water from the spring at the Grotto of Massabielle.

The spring, which Bernadette is said to have dug, can be seen at the rear of the grotto, and it is protected by a glass covering.  Pilgrims drink the water due to its healing power, or they bathe in the water at the “piscines” (baths).