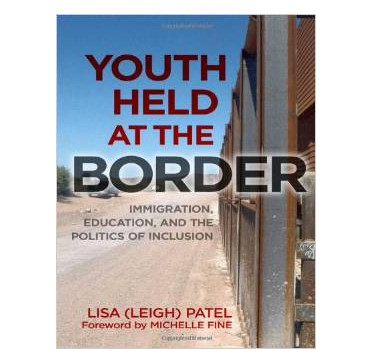 In her book, Youth Held at the Border, Lisa Patel presents an in-depth discussion of the realities of life for immigrant students in the United States. She does this not primarily through data and statistics, but through narrative chapters about the experiences of real young people with whom she has worked.

The daughter of parents who emigrated to the U.S. from India, Patel spent six years working closely with students and faculty at Franklin High School in Boston. She draws many of her stories and insights about immigrant youth from her time working with this school.

During the time of Patel’s involvement with Franklin High, the school followed the international model, meaning that its student population was made up of youth who had recently emigrated from countries all over the world.

Many of the students at Franklin were undocumented. The fears and difficulties associated with being undocumented magnify for these particular students the stresses of being an immigrant in a new country.

The first seven chapters present profiles of seven different young people whom Patel has worked with and gotten to know. In each chapter, she discusses the student’s background, including country of origin, economic status, family situation, and history of schooling before arriving in the U.S.

Then, through stories about the student, both inside and outside of the school, she gives a picture of the ways these factors influence the student’s life, academically and otherwise, and the difficulties the students face as a result of being immigrants. For example, in Chapter One, she tells how Wana, a student who immigrated from Haiti, could not realize her dream of going to nursing school because her undocumented status prevented her from accessing financial aid.

And in Chapter Four, she profiles Matthias, a student from Cape Verde, who had come to the U.S. to live with his father, a man with whom, prior to Matthias’s arrival in the U.S., had spent only twelve days. His father was resentful and emotionally abusive, meaning that Matthias’s home situation undermined the positive feedback he received in school for his excellent academic performance.

Patel asserts that teachers and counselors in the U.S. are often ill-equipped to understand the complicated dynamics of immigrant families, and that the widely accepted American theories about the emotional development of adolescents do not present an adequate framework for understanding immigrant students [Patel 40].

In the second half of the book, from Chapter Eight onward, Patel incorporates her insights about these individual students into a larger-scope discussion about globalization, and the increasing tendency of people from all backgrounds to migrate across various borders.