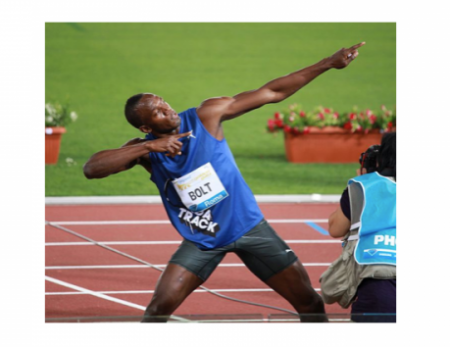 The unstoppable Usain Bolt recovered from a slow start to win the London Diamond League 100 meters race at the Queen Elizabeth Olympic Park.

Failing to leaving the blocks quickly, he went into over drive, turned up the heat mid-way the track and powered his way to victory in a time of 9.85 sec.

American Michael Rodgers was second in 9.98, and Jamaica’s Nesta Carter was third. Kim Collins of Saint Kitts and Nevis faded to finish fourth after a fantastic start.

Bolt, the fastest man on the planet, was returning to the stadium where he won three gold medals in the London Olympics games last year.

“It (the start) was horrifying for me,” he said. “I think it is just race rust and I just need to get a few races in. The rounds in the world championships will help that and get my legs freer and a bit lighter. Hopefully, the coach will figure out what I need to do to get me more explosive out of the blocks, I guess.”

“For the first time, I think, in a long while I was slightly nervous. Initially, I was excited to come out because I knew it was going to be a big crowd. But when I got out there and I saw that it was ram-packed and the energy was still like the Olympics, it was just wonderful, so I was slightly nervous but I loved the energy of the crowd. It was beautiful and I love competing here.”

Bolt was running his fastest time for the season and in seeking to dispel any notion that he is not the real mckoy, the real deal, Bolt declared, “I try to assist the sport to do great things and to show the sport in a good light, and that is what I’m here for,” he continued.

“You guys are here to tell people that Usain Bolt is needed for the sport or whatever, but I am just here to do my best and to prove to the world that it is possible to run clean and train hard and be focused.”

Earlier, at a press conference, Bolt had told the media that drug scandals was harming the sports. He, however, insisted that his performance remains clean and also pointed to the fact that he has been doing phenomenal things from an early age.

The unrelenting press, in continuing with their line of questions about the use of drugs in sports and cheats, a relaxed Bolt responded, “Definitely, it´s going to set us back a little bit, but as a person, I cant focus on this.” he further added, “I am just trying to work hard, run fast and hopefully help people to forget what has happened, and just move on and look forward to the World Championships.”

There is no doubt that there will be a lot of “Boltage” to contend with this summer and spectators will continue to scream for Usain as he turns up the heat!