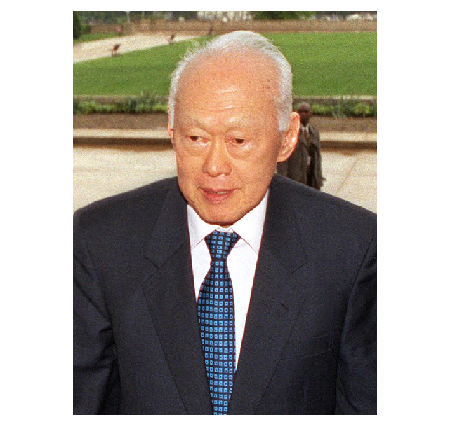 Lee Kuan Yew, who is said to be the father of Singapore, was no ordinary leader.

The 91-year-old leader who recently died has left behind a rich legacy that is  difficult to match by leaders either in the past or currently.

Born in 1923, Lee co-founded Singapore in 1965 when he declared its independence from Malaysia and led the country for more than three decades.

The current Prime Minister, Lee Hsien Loong, said of his father, “He fought for our independence, built a nation where there was none and made us proud to be Singaporeans.”

Building up Singapore was his passion, the Prime Minister also said, citing a quote from his father: “At the end of the day what have I got? A successful Singapore. What have I given up? My life.”

Lee has been accorded praises and accolades by leaders around the world for his work and contribution to the building of Singapore into a modern nation state.

President Obama viewed Lee as a visionary who helped him formulate U.S. policy of “rebalancing to the Asia Pacific,” when the two met in Singapore in 2009.

“He was a true giant of history who will be remembered for generations to come as the father of modern Singapore and as one the great strategists of Asian affairs,” the President said.

“Lee Kuan Yew (LKY) has left us; but, what a leader! He was born in British Singapore, baptised Harry, but sunk the name. Took his people from penury to prosperity, as his small island led the global metrics of success,” said Dr. Franklin Johnston, in a newspaper column.

Lee was a lawyer by training; however, he turned to politics in the early 1950s, forming his own political party, the People’s Action Party in 1954.

After Lee’s Party, PAP gained power and he was installed as Prime Minister he introduced a five-year plan calling for urban renewal and construction of new public housing, greater rights for women, educational reform, and industrialization.

Since then, there has been no looking back for Singapore as by the 1980s, Singapore, under Lee’s guidance, had a per capita income second only to Japan’s in East Asia, and the country had become a chief financial center of Southeast Asia.

Today, many leaders are using Singapore as a point of reference for best practices. For example, Jamaica’s leader of Opposition said recently in a budget speech, “Singapore has stepped up and moved its people from poverty to prosperity.” We can do the same. In 1962 Jamaica’s GDP per capita was approximately US$460…Singapore’s was US$470. Jamaica’s, in 2013, was US$5,290. Singapore’s was US$55,192. Today in Singapore a cleaner earns the equivalent of $100,000 per month. A similar person employed in Jamaica would earn just about $22,000. “Mr Speaker,” Holness said, “the real point to be made is the movement from poverty to prosperity for our people is possible.”

Lee’s leadership is one that cannot be easily questioned, and there is no doubt that he was a leader of leaders who understood the sweep of history and people.

To borrow from Dr. Johnson, other countries and leaders left to their own devices, eat, sleep, excrete, procreate, burn calories, create mischief, get hungry, and the cycle starts over.

That cycle it must be said was upset by Lee a long time ago.

Now, the question is are other leaders especially those from third world countries  prepared to change the course of history, ala Lee or are they set on continuing or perpetuating that putrified cycle?