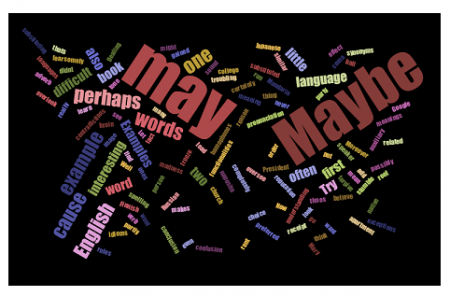 It is often said English is one of the most difficult languages to learn, but is it really? Well, if you think it is, try Finnish, Russian, Japanese, and Mandarin.

The fact is English has gained the reputation of being fearsomely difficult, partly because of its many contradictions. For example, ‘overlook’ and ‘oversee’ have opposite meanings, while ‘look’ and ‘see’ mean the same thing.

There are also the exceptions to rules that can cause even the native English speaker to stumble for example, ‘receipt’ and ‘believe.’

Moreover, the order in which to put words, add to the madness of understanding the language for example; we would say “an interesting little book” but not “a little interesting book.” The sound effect in tone certainly makes the first one’s preferred choice.

Dealing with the spelling, pronunciation, synonyms, homophones, idioms, and other functionalities of the language may not only be troubling, but could also cause a brain freeze.

Now, here are two words that often lead to confusion and at times cause one to run to Google to find meaning and usage: maybe and may be.

Maybe (one word) can be substituted with perhaps or possibly. (Maybe is an adverb.)

Try substituting the maybe in these examples with perhaps:

Maybe she would never completely forgive him.

She didn’t want to go to the party, so maybe that’s the reason she went to church.

“Maybe we could rent an apartment,” Mary said.

May be (two words) is similar to might be, could be, or would be. (The word may in may be is a modal auxiliary verb.)

I may be the first person to come to that conclusion.

The ball may be on the roof.

I may be related to the President of the college.