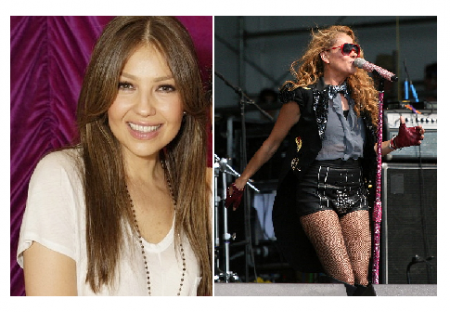 Today, there is a heated debate on who the “Queen of Latino Pop” music is as well as whether or not there can be more than one queen reigning simultaneously.

Although the outcome of this debate may be inconclusive, there is one thing that is certain and that is these three Latino pop stars have created a storm in the music industry by churning out hit records time and again.

Thalia, often referred to as the “Queen of Latin Pop” has sold over 40 million records worldwide. She has had 15 No. 1 singles and received numerous accolades including five Latin Billboard awards and various Latin Grammy nominations.

The Mexican superstar is scheduled to release her new studio album on November 17 while at the same time launch her new fashion line, Thalia Sodi, for Macy’s.

On the other hand, the 43-year-old Paulina Rubio is considered not only as one the most influential Latin celebrities in the world but also a multi-talented super star. She has sold over 20 million records worldwide and is now prepping work on her new studio album that is scheduled to be released early next year.

That said, Colombia’s Shakira’s is no push over, her record has been a staple not only in the Latino music market but also globally. This singer-songwriter has also exhibited talents as a dancer, record producer, choreographer, and model.

Shakira has won many awards including 2 Grammys, 28 Billboard Latin Music Awards, eight Latin Grammy Awards, seven Billboard Music Awards, five MTV Video Music Awards, among others. She has sold over 60 million records worldwide and is said to be one of the best-selling artists of all time.

The 37-year-old star announced recently the launch of her new line of children’s toys. At the same time, she is preparing for the birth of her second child.