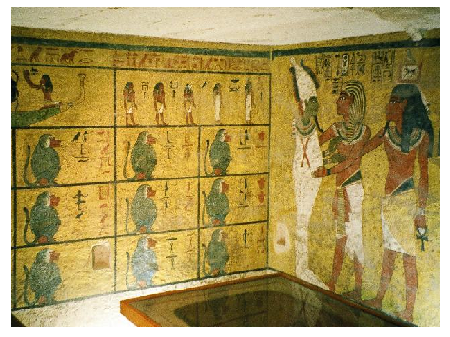 The Egyptian Ministry of Antiquities has just announced that a scientific team has found initial evidence of what might be a hidden chamber in the tomb of King Tutankhamun.

A survey of the tomb was conducted using infrared thermography, which measures temperature distributions on a surface.

According to Mamdouh el-Damaty, the Minister of Antiquities, “the preliminary analysis indicates the presence of an area different in its temperature than the other parts of the northern wall.” One possible explanation is that the variation in temperature is, in effect, an infrared shadow of an open area behind the wall.

The finding is consistent with the theory of archaeologist Nicholas Reeves, who, earlier this year, published a paper in which he claimed that the tomb of the 18th-Dynasty pharaoh includes two doorways that were plastered and painted over.

The doorways, Reeves argues, are among several clues indicating that the tomb was originally built for Nefertiti, who died in 1331 B.C.  She was the principal wife of Akhenaten, who is believed to have fathered Tutankhamun with another wife.