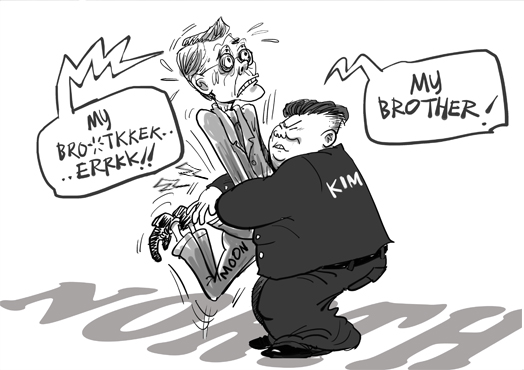 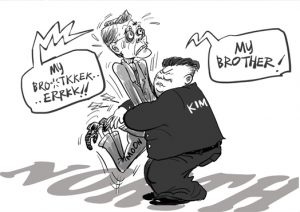 According to press reports, North Korea’s leader Kim Jong-un told his counterpart President Moon Jae-in of South Korea that he would be prepared to abandon his nuclear weapons if the United States would agree to formally end the Korean War and undertake not to invade his country.

The reports also noted that Mr. Kim said he would invite experts and journalists from South Korea and the United States to watch the shutdown next month of his country’s only known underground nuclear test site.

“I know the Americans are inherently disposed against us, but when they talk with us, they will see that I am not the kind of person who would shoot nuclear weapons to the south, over the Pacific or at the United States,” Mr. Kim told Mr. Moon, according to press reports.

United States Secretary of State Mike Pompeo, who met with Mr. Kim in April also revealed that he had had a “good conversation” with Mr. Kim during his surprise visit to Pyongyang, the North Korean capital.

“We had an extensive conversation on the hardest issues that face our two countries,” Mr. Pompeo said. “I had a clear mission statement from President Trump. When I left, Kim Jong Un understood the mission exactly as I described it today.”

On Friday, Mr. Kim and Mr. Moon signed a joint declaration recognizing “a nuclear-free Korean Peninsula” and “complete denuclearization” as a common goal of the two Koreas. Mr. Kim, however, has never publicly renounced his nuclear weapons and the meaning ‘denuclearization,” seems to be a matter of interpretation.

“I am determined not to repeat the painful history of the Korean War. As the same nation living on the same land, we should never shed blood again,” Kim told Mr. Moon.

“I will give you my word that there will never be a use of force,” Kim reportedly said.