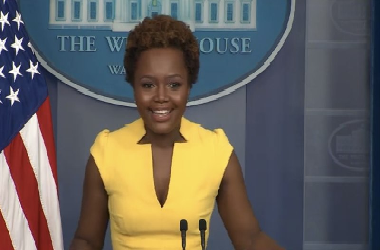 U.S. President Joe Biden has named Karine Jean-Pierre as his new top spokesperson – the first time a black or openly gay person has held the role.

Ms. Jean-Pierre, who is 44, has served as the administration’s principal deputy press secretary since Mr. Biden was elected.

She will replace outgoing press secretary Jen Psaki in the top role at the end of next week.

President Biden in a statement said, “I am proud to announce that Karine Jean-Pierre will serve as the next White House Press Secretary.”

He said further, “Karine not only brings the experience, talent, and integrity needed for this difficult job, but she will continue to lead the way in communicating about the work of the Biden-Harris Administration on behalf of the American people. Jill and I have known and respected Karine a long time and she will be a strong voice speaking for me and this Administration.”

“Jen Psaki has set the standard for returning decency, respect and decorum to the White House Briefing Room. I want to say thank you to Jen for raising the bar, communicating directly and truthfully to the American people, and keeping her sense of humor while doing so. I thank Jen her service to the country, and wish her the very best as she moves forward.”

Ms. Psaki is taking up a job at the left-leaning MSNBC cable news outlet.

Ms. Jean-Pierre, previously an analyst at MSNBC, brings more than two decades of experience in Democratic politics to the role.

Born on the French Caribbean island of Martinique and raised in Queens, New York, she was a key political director in the Obama administration.

She is the first Black and out LGBTQ person to hold the position.