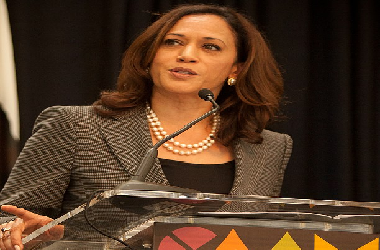 Born in 1964 in Oakland, California, Kamala Harris was selected as Vice President Candidate by Democratic presidential nominee, Joe Biden. Kamala is the daughter of a Jamaican father and an Indian mother. Her mother, Shyamala Harris, migrated to the U.S. from India and was a civil rights activist during the civil rights movement in the 1960s.

Kamala also attended the civil rights movement with her parents. Her childhood was spent in Berkeley.

She later attended Howard University and the University of California’s Hastings College of Law.

For eight years, she worked at Alameda County District Attorney’s office. Later, she served as the district attorney of San Francisco from 2004 to 2010 and was the first woman to occupy that position.

In 2017, she became a U.S. Senator and was the second black and first American of Asian ancestry to hold the office.

“I have the great honor to announce that I’ve picked @KamlaHarris- a fearless fighter for the little guy, and one of the country’s finest public servant-as my running mate,” Biden tweeted while announcing the candidacy of Kamala Harris as Vice President.

Biden’s decision to select Kamala Harris was hailed by many Americans of Asian and Black backgrounds.

Many Asian Americans hailed this decision terming it as ‘historic.’

At her nomination, Harris remarked that she has been in politics for a very long time and was influenced by the civil rights movement of the 1960s.

After the announcement from Biden, Harris also took to Twitter to express her gratitude. “@JoeBiden can unify the American people because he’s spent his life fighting for us. And as president, he’ll build America that lives up to our ideals. I’m honored to join him as our party’s nominee for vice president and do what it takes to make him our Commander-in-Chief,” she wrote on Twitter.

Harris’ background could be a breakthrough for Biden. She could urge voters of both black and Asian origin to vote for Biden. According to data from credible sources in 2015, about 50% of Asian Americans termed themselves as Democrats. Harris’ nomination could put a considerable increase to it.

Asian-American population holds a significant number of eligible voters as compared to other ethnic groups. 1.1 million Asian-American used their right to vote in 2016, and the number has grown significantly since then.

Harris’ selection by Biden as his running mate will undoubtedly boost his campaign as he challenges President Trump for the right to be in the White House.

The journey of Kamala Harris from a middle-class girl to a Vice President Candidate and possible presidential candidate in the coming years is a lesson for many.

Her life exemplifies the democratic principles of America, where a middle-class woman of non-American origin could rise to the top with the help of hard work and enthusiasm. Harris has broken the barriers of gender and race.

The decision by Biden to pick Harris may prove to be a right and timely one.