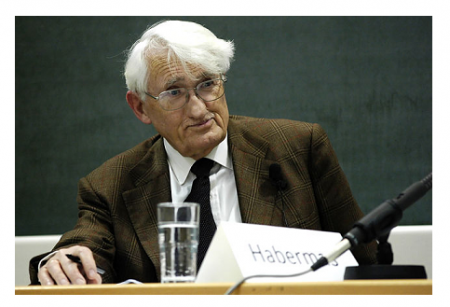 The fields of philosophy, sociology, political science, and education often intersect. While Jurgen Habermas is known primarily for his contributions to the fields of philosophy and political science, his work has also had some important influences in the field of education. Here is a brief biography of Habermas and a description of the ways his work views society, curriculum, and pedagogy, therefore applying to and influencing education.

Habermas was born in Germany in 1929. His father was a Nazi sympathizer. Habermas served in the Hitler Youth organization, but he later rejected Nazi ideology after viewing post-WWII documentaries about Nazi atrocities. He studied at the Frankfurt Institute for Social Research, with Max Horkheimer. Horkheimer rejected Habermas’s postdoctoral thesis because he found it to be too radical. Subsequently, Habermas completed his postdoctoral work with Abendroth at the University of Marburg. He later returned to The Frankfurt School and took over Horkeimer’s chair in the philosophy department. Habermas is now retired, but he continues to write and to serve as a visiting professor, and in recent years was a vocal opponent of the Iraq War.

Heavily influenced by Marxism, Habermas’s work is critical of the capitalist system. He developed the concepts of Life World vs. System World. The system world “colonizes” the life world. The public sphere is where conversations from the life world can attempt to affect change on the system world. He believes that schools sit in between the two worlds, influenced by both.

In Habermas’s work, the very concept of knowledge is questioned, and science and technology are suspect. He believes that change can only be achieved through communication and consensus.

A curriculum developed according to Habermas’s philosophy would include civics, political science, government, and economics to help students understand the systems in their societies.

It would include sociology, humanities, and anthropology, to help them understand various cultures and the concept of culture itself.

It would include linguistics, semiotics, and semantics to help them understand and question language and meaning. A science curriculum influenced by Habermas would be reformed to show fallibility to approach science as another way of “knowing,” like religion or philosophy, rather than an absolute. Whatever the subject, this curriculum would include examination of where the “knowledge” presented comes from, and the assumptions behind it.

Pedagogy influenced by Habermas would be heavily focused on dialogue. All students and teacher would have a voice and would participate in the shaping of the system. Classrooms would be democratic. There would be intensive examination of the processes of communication.

The pedagogy would include an emphasis on co-operative learning; for example, there would be lots of group work. Decisions would be made according to consensus.

While not all of these things are at work in all current schools and systems, you definitely can find many of them being practiced. Whether or not this is the direct result of Habermas’s writing, his ideas have certainly influenced many thinkers and policy makers. His work has undoubtedly, whether directly or indirectly, influenced education.