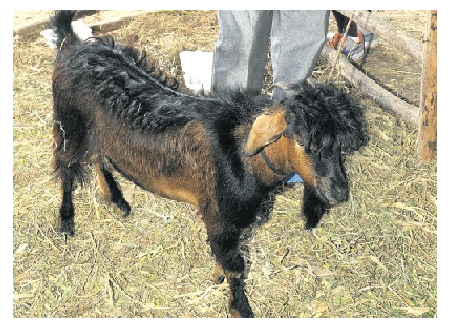 The annual Denbigh Agricultural, Industrial, and Food Show held in Jamaica got people talking and snapping photographs not only because of the wide range of produce and products on display but also ‘Boy Anderson‘ — a goat crowned the most beautiful in its category.

The 11-month-old mixed breed goat was the star attraction of the show as it captured the attention of thousands admirers.

Linton Anderson, the owner of the prized goat, told one newspaper that the goat had received non-stop attention over the three-day period of the show.

“I never expected this,” he said, while mentioning that even the government ministers had heard about the goat and had stopped by to meet ‘Boy Anderson.’

Mr. Anderson told the Newspaper that he bought the goat last year December to be a companion to another goat kid that he had which was crying non-stop.

He further said that the people within his community were struck by the goat’s beauty and encouraged him to take the goat to the annual show.

“I was very happy that I did as he won a prize and it was really exciting,” he concluded.