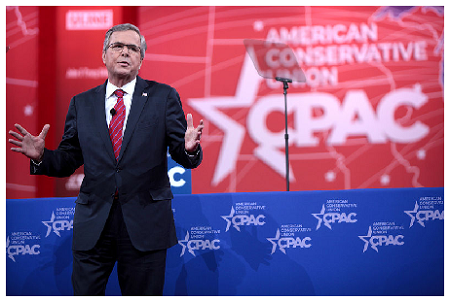 Jeb Bush, former Republican Party presidential candidate and an arch rival to Trump in the nomination race before dropping out, has commended Trump at the masterful way in which he continues to dominate the news cycle.

He said he understood the rise of Trump and why supporters were backing him, but regretted the way Trump “preys on people’s angst rather than offering tangible solutions.”

Speaking at an event in Amsterdam hosted by the Nexus Institute, the former presidential candidate discussed the rise of Trump and of Democratic candidate Bernie Sanders.

“What I fear is that people, kind of looking down their nose, will say the people that are supporting Donald Trump are a bunch of idiots. They’re not. They’re legitimately scared. They’re fearful. They’re not as optimistic for legitimate reasons and there should be respect for that,” the former Florida governor reportedly said.

“And on the other side, a similar respect needs to be shown,” he added.

Bush, who previously endorsed Sen. Ted Cruz for president, was not as critical of Trump as he has been in the past but is still unlikely to back the presumptive GOP nominee.

He also said Trump has “been phenomenally good at using the new way of communicating” to stay at the front of news cycles.

“He can literally wake up – I have this vision of him in, you know, silk pajamas, with his little slippers on with a ‘T’ on his emblem. He wakes up and he sends out a tweet ripping, you know, someone a new one,” Bush said.

“He’s the first guy that’s ever been allowed to call into everything but ‘Meet the Press.’ I think they even relented. So he has been a master at how you get into the media, the new media, the diverse media that exists today in a way that had never been done before.”