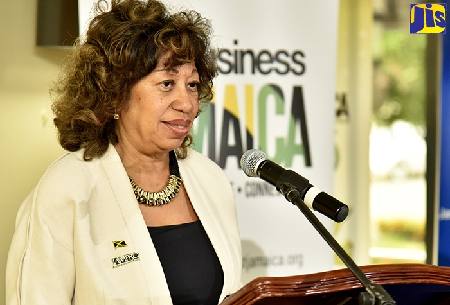 The Jamaica Promotions Corporation (JAMPRO) is on a mission to get Jamaica to top-10 ranking in the World Bank’s Doing Business Report (DBR).

The agency’s President, Diane Edwards, said that plans are in place for a ‘Getting to Top 10 DBR’ initiative, which is designed to identify and implement impactful reforms for Jamaica.

“If we reach that goal … it would give us huge publicity, image building, but in addition, we would have the sights of the world on us and we would be able to really ramp-up in terms of our attraction of investment,” she said.

She was speaking at the National Competitiveness Council meeting held at the Office of the Prime Minister on November 15, where public-sector partners were addressed on the 2019 DBR.

She said that some 69 reforms were identified; however, this has been reduced to a “manageable 20 global reforms that we need to undertake”.

“This we want to do by 2020; it’s a big chunk of reform, but we can do it because it’s really about knowing what we need to do and being deliberate about it. We have started discussions with implementing agencies, and we have actually targeted the reforms that we need to implement to get us there,” she pointed out.

The JAMPRO President noted that a conducive business environment is integral to a country’s attractiveness as an investment destination.

“The lower cost we can offer to businesses in terms of time and money… this has a positive impact on our local business climate and attracts local direct investment as well as foreign direct investment,” she said.

“Enhancing the business climate, reducing bureaucracy and making regulation more effective and more in synchronicity with the demands of the private sector, that is what is going to transform our economy and propel us forward to the growth that we all want,” she added.

The meeting, which was addressed by Prime Minister, the Most Hon. Andrew Holness, examined improvements that will have to be made in enacting business reforms for the country to rise to the Top 10 ranking in the DBR.

The annual report ranks economies based on how easy it is to do business there, taking into account trading regulations, property rights, contract enforcement, investment laws, the availability of credit and a number of other factors.

In the latest DBR report, Jamaica was ranked 75th of 190 countries. This represents a five-point slide downwards from the country’s previous ranking of 70th in the 2018 DBR. However, Jamaica is the top-performing country within the Caribbean and is in the top six within the Latin America and Caribbean (LAC) region.

The country’s best performing indicator was that of Dealing with Construction Permits, which moved 22 points upwards as a result of the passing of the National Building Act in March 2018.

Jamaica also earned the 12th spot in Getting Credit, while slipping marginally to 6th in the Starting a Business Indicator.

“This, again, means that we have improved our score in six indicator areas, but we have slipped in the rankings because other countries are improving faster than we are,” she noted.