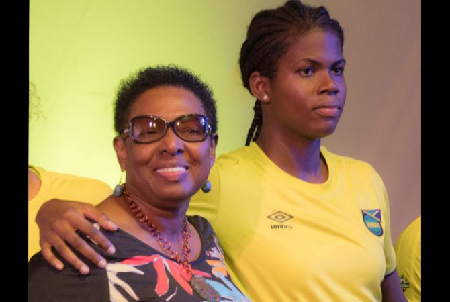 The Guardian newspaper in the United Kingdom has named Jamaica’s Reggae Girl Khadija “ “Bunny” Shaw Footballer of the Year.

Shaw is only the third recipient of the award and joins the ranks of world superstars Italian Fabio Piscane in 2016 and Spain’s Juan Mata in 2017.

The Minister of Culture, Gender, Entertainment and Sport, Olivia Grange, has commended Shaw for receiving the award and opined that it’s excellent since Shaw is the first female to cop the title.

“This is terrific news. Following the grand celebrations, we had for the entire team recently, this award is another fillip in their caps before the Reggae Girlz embark on preparations for the 2019 FIFA Women’s World Cup in France,” said the Minister.

Ms. Grange further said, “The world is taking notice of what is happening in Jamaican women’s football, and this will serve as further encouragement to players at all levels, that despite their circumstances, with the right attitude, approach, and support they can make it on the international stage.”

The Guardian award for Footballer of the Year is granted to a player who has done something truly extraordinary, whether by overcoming adversity, helping others or setting a sporting example by acting with rare honest

“Khadija has been a great role model not just on the football field with her league team the Lady Volunteers and her national team the Reggae Girlz. She has demonstrated the ability to rise above personal tragedy by keeping her eye on the ball. It must have been very difficult to have lost four brothers and still find the fortitude to pursue her dreams,” added Minister Grange.

She also noted that the award is particularly significant since Khadija hails from Spanish Town, a crime challenged area in the island.

“It gives me even greater pleasure in congratulating her knowing that she is from Spanish Town. I want young ladies across the country to look at her and the other Reggae Girlz and see what is possible in life.”