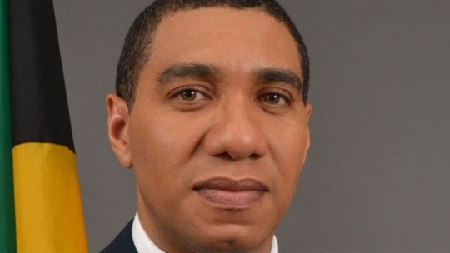 Jamaica’s Prime Minister Andrew Holness in his address to the nation on its 54th Independence Celebration has noted a number of problems that continue to plague the country.

On the other hand, he also noted that the country has a lot to boast about. He said in his Independence message thus: It is fortuitous that we are celebrating our independence at the same time that our athletes are in Rio, all set to bring glory again to this small nation, an athletic superpower.

Our athletic prowess is one indication of our excellence as a people. It is a metaphor of our distinction. A distinction manifested in our music, with us punching way above our weight, by creating a genre, reggae,  which is known and revered globally; and  in our vibrant culture  which has made its indelible stamp on the world in the areas of cuisine, fashion, dance, sculpture, and theatre.

That a country with a population of approximately two point eight million people can have the fastest man and woman   in the world and produced an artiste, Bob Marley, whose single One Love the BBC could have designated “theme of the millennium”; and whose album, Exodus, Time magazine could have voted “Album of the Century” is, indeed, thrilling.

We are the people who have produced the world famous Blue Mountain coffee and have given the world the all-inclusive hotel concept.  We have produced world-class scientists, intellectuals, entrepreneurs and statesmen. We are a people of distinction, with an illustrious history.

Our Founding Fathers had high hopes for us. In a speech in Britain in February 1962, just before our independence, Rt. Hon Norman Manley said: “There is no country in the world, not now independent, which is fit to achieve that status than Jamaica now is. Indeed, we have been ready for Independence long ago…”

Rt. Excellent Hon. Sir Alexander Bustamante, on that same trip, said: “We must move forward with the firm resolution of making Jamaica the greatest little nation on earth.  With the help of God, we intend to achieve this.”

The fact is, we are yet to maximize our potential.  That must be the mission of this generation.  Independence is as good a time as any to soberly reflect on our 54 years as a nation.

In making an objective assessment, it must be admitted that there is a sense among our people, especially our young people that we have underperformed.

Among our primary deficits has been our failure in the post-independence period to grow our economy on any sustained basis. We have had spurts of economic growth, only to be followed by long periods of decline. We must begin to reverse that and normalize economic growth and prosperity. This must be the commitment of this generation.

We must build a culture compatible with economic prosperity. This must include scientific and technological innovativeness, characterized by rising levels of investment in research and development; a dynamic, creative SME sector that is avant-garde and nimble; a facilitatory , customer-focused public sector, an energy-efficient economy with heavy emphasis on renewables; an equitable, efficient, simplified and production-driven tax system; an economy with strong and  growing backward and forward linkages  which  foster a virtuous circle; protection of our physical environment and promotion of environmental sustainability.

On the social side, we must make the following commitments as we move into our 55th year:

These are not impossible dreams. They are attainable goals. We must commit ourselves to them and work toward them. I suggest, fellow Jamaicans, that the way to make this Independence  more meaningful to our young people and to older independence skeptics is not to give lectures on patriotism or to scold them for not being patriotic enough.  If we concretely change people’s   everyday realities where they begin to feel the impact of independence, they will lose their skepticism.

When we are managing our own affairs with fiscal prudence and discipline, we advance our economic independence.

We are a people of excellence who have already made our mark upon the world. Over the next few days, the eyes of the world will be on us in Rio as we shine yet again.

We need to create our own Rio at home.  We can win gold in the economic race. But like our athletes, we must prepare, prepare, prepare. If we apply that same discipline, that same focus, that same tenacity, that same resilience—despite setbacks, injuries and hurdles.—we will succeed.

Independence is ultimately about freedom—that is why our Independence celebrations are tied to our Emancipation celebrations.  They are indivisible. This is, significantly, the fiftieth year since the emergence of Rocksteady in Jamaica.  One of the greats of that era, who is still preforming today, is Mr. Ken Boothe.

One of his Rocksteady hits was called Freedom Street.

His dream is our dream:

“I see a big, big street

Where all ends meet

It must be Freedom Street

That is our goal.  My Fellow Jamaicans, with the grace and guidance of God, let us walk together down Freedom Street with optimism and determination to succeed.