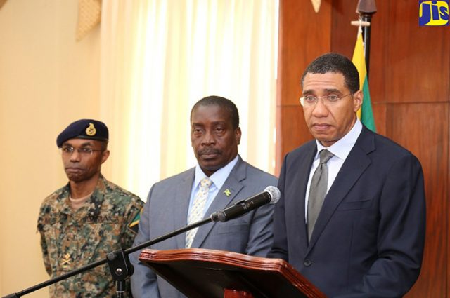 Amidst the rising level of crime in Jamaica, Prime Minister Andrew Holness has declared a State of Public Emergency in the western parish of St. James effective Thursday, January 18.

The Prime Minister made the announcement at a press conference held at Jamaica House.

“Crime and violence in particular murders have been escalating in the parish of St. James. I have been advised by the security forces in writing that the level of criminal activity experience continued and threatened, is of such a nature and so extensive in scale as to endanger public safety”, said the Prime Minister.

The constitution provides that a period of public emergency can be declared by a proclamation if the Governor-General is satisfied that action has been taken or is immediately threatened by any person or body of persons in such a nature and on so extensive a scale as likely to endanger public safety.

Last year, 335 murders were recorded in St. James, which is twice the number of any other parish.

Prime Minister Holness outlined that under the state of emergency the security forces will have extraordinary powers and some rights will be suspended.

He noted, however, “this does not mean that use of these extraordinary powers can be arbitrary or are beyond review. The security forces are expected and have been directed to treat citizens with respect and protect the dignity and safety of all.”

The security forces will have the power to search, curtail operating hours of business, access to places, and to detain persons without a warrant.

A special hotline has also been set up to be manned by the Jamaica Defense Force for persons to give information. The number is 830-8888.