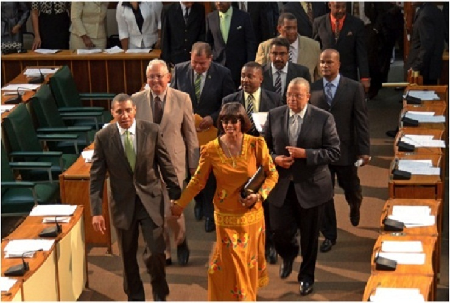 Ten years after assuming the helm of the People’s National Party (PNP), Portia Simpson Miller announced on Sunday that she will be stepping down soon.

In an address at a PNPs National Executive Council (NEC) at Cedar Grove Academy in Portmore, St Catherine, Mrs. Simpson Miller told the members that she will be departing soon to give the new president enough time to rebuild the party to win the next general election.

Mrs. Simpson Miller was recently reconfirmed as PNP President, a point she reiterated at the meeting.

Simpson Miller easily dismissed a recent challenge to her leadership by Dr. Karl Blythe who was trying for the second time to unseat her.

In that contest, she defeated three stalwarts of the party — Dr. Peter Phillips, Dr. Omar Davies, and Dr. Karl Blythe and was made the head of the Party.

In September 2008, she was again challenged by Dr. Peter Phillips, after leading the PNP defeat in the September 3, 2007, general election, but was able to stave off that challenge.

She first ran for the post in 1992 but was defeated by P.J. Patterson in that contest to succeed Michael Manley.

Since the loss at the polls of the February 25 general election and the November 28 local government election, there have been numerous calls for Simpson Miller to step down from the leadership of the PNP Party.