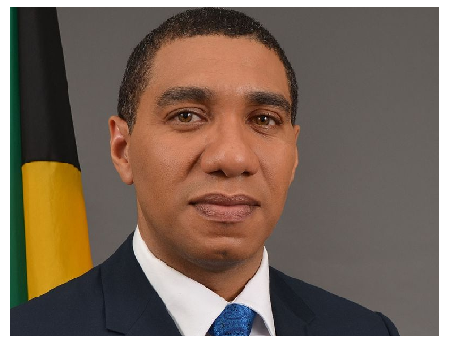 Andrew Michael Holness, ON, is once again assuming the position of leadership as the Prime Minister of Jamaica.

Holness decided to go to the polls in the 29 December 2011 general elections in a bid to get his own mandate from the Jamaican electorate.

He failed in that bid, however, losing badly to the Portia Simpson Miller-led PNP, with the PNP gaining 42 seats to the JLP’s 21.

Today, he has earned bragging rights by virtue of winning the national elections held on 25 February 2016, thus his own mandate.

He won with the Jamaica Labour Party getting 32 seats compared to 31 seats for the incumbent People’s National Party.

Holness’ inaugural address at the swearing-in ceremony was not only state-man like, but gave the populace a glimpse of what Jamaica could become with all hands on deck or if everyone buys into his vision.

His acknowledgement of a superior being and divine power — God, at the outset of his speech, will no doubt be music to many Jamaicans’ ears as the Christian Faith has been an entrenched part of the country’s culture.

Holness is himself a Christian — Seventh Day Adventist by faith.

“I recognize that I stand here today only by the Grace of God. It has not been an easy journey to this podium, but earnest labor and fervent prayers conquer all. To God be the glory,” declared Holness.

He further said, “To achieve the vision of shared prosperity through inclusive economic growth and meaningful job creation, now more than ever. Government must lead, activate, empower and build real partnerships. I intend to lead a Government of partnership. The solutions to our problems do not rest with Government alone. The sum total of our potential exceeds our problems; our collective capabilities are greater than our challenges, but it is only through partnership that these capabilities and this potential can be seized, harnessed and realized for the good of Jamaica.”

The foregoing utterance marked a departure from the tribal politics practiced in the country for decades.

The fact is Jamaica has been held back from socio-economic development primarily on the basis of party ideology, old boy corrupt network activities, and a rotten underbelly of “anancyism” that dominates the informal economy.

Holness is on point in calling for collective responsibility and partnership among stakeholders to make Jamaica the center of the Caribbean and to channel Donald Trump — make Jamaica great again!

“My vision is to turn Jamaica into the center of the Caribbean. A center of finance, trade and commerce, technology and innovation, and the center of arts, culture, and lifestyle regionally. This is all possible within our lifetime. Despite any negatives, Jamaica still has a powerful and alluring brand amplifying our voice and influence in the world,” said Holness.

Now, this is a noble ambition, but can only be realized if people buy into the vision and of course if Holness is not a “bag a mouth” or an “air bag.”

It requires action and leadership and the onus rest with the governing JLP Party led by Holness.

Honess’ insight into the interpretation of his mandate is noteworthy as it sends the right signal not only to people locally, but also in the diaspora.

“I stand here humbled by the awesome power of you, the people, and I commit to doing right by you. The people are sovereign and their views and votes must never be taken for granted,” said Holness.

A government that is people centric is in pole position in understanding and interpreting the needs and wants of its people and moreover best positioned to meet and satisfy those needs.

So, as Holness takes on this new mantle of leadership, Jamaicans will be looking with hope that he will make a meaningful difference.

Holness is the youngest person to become Prime Minister in Jamaica’s history as well as the country’s ninth Prime Minister overall. He is the also first prime minister to be born post-Jamaican independence in 1962.

“Andrew, do the right thing!”