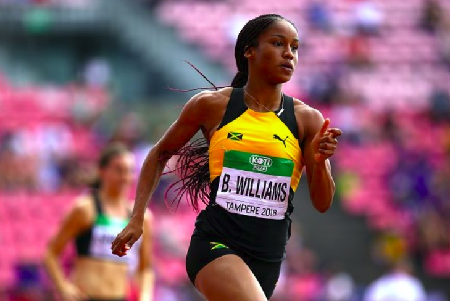 Since taking to the track, the young athletic star has not looked back and has credited the “Jamaican tradition” for her prowess in spikes.

Although born in the U.S., Williams has opted for her Jamaican roots rather than the place of birth.

Briana is the daughter of Jamaican mother Sharon Simpson and the late American Steven Williams.

“Bri”, at 17 years old,  is considered one of the brightest up and coming prospects in the sport of athletics.

The sprinter’s decision to run for Jamaica has placed her among the galaxy of Jamaican stars such as Shelly-Ann Fraser-Pryce, Elaine Thompson, Merlene Ottey, the legendary Usain Bolt, among others.

In a recent press report, Williams pointed to Jamaica’s star athletes who have inspired and challenged her to be at her best.

“I was grown up in the Jamaica tradition way. All the time when I was watching the Olympics, I would see Bolt and Shelly-Ann winning and think I want to be like them.”

Additionally, she noted that running for Jamaica is like a “Mecca” experience.

“America has football, baseball; they are more fans of that. In Jamaica, they show support to their track athletes, and I like that. In America, there is track, but it’s not at the same level. When the Jamaica athletes are at the Olympics or World Championships, there is screaming in the middle of the streets and people cheering them on. I like that culture more,” said the young sprinting star.

At the tender age of 17-years-old, Williams has much to brag about in her young career.

Additionally, she became the youngest female ever to win both the 100 meters and 200 meters at the 2018 IAAF World U20 Championships in Tampere.

For her athletic prowess, in 2018 she was nominated for the IAAF Female Rising Star and the Laureus Breakthrough of the Year awards.

She is the holder of both the Jamaican youth and Jamaican junior national records with a time of 11.01 s in the semifinal.

Williams, the World U-20 sprint double Champion, will represent Jamaica at the Doha World Championships later this year.

She is currently coached by Ato Boldon, a former athlete from Trinidad and Tobago and four-time Olympic medal winner.