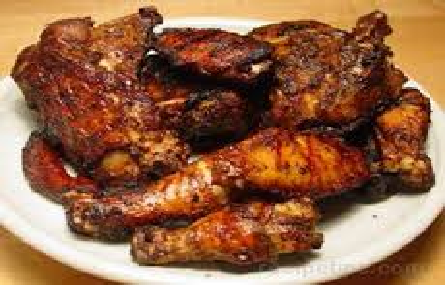 Jamaican cuisine is known around the world to be not only delicious but finger-lickin’ good. It includes a mixture of cooking techniques, flavors, spices, and influences from the indigenous people on the island as well as the Spanish, Irish, British, Africans, Indian, and Chinese who have inhabited the island.

Additionally, the food is influenced by the crops introduced into the island from tropical Southeast Asia.

Now, an all-time favorite Jamaican dish that has gone global is the Jamaican jerk chicken.

This smoky, tangy, and spicy meal is one of the most iconic food in the island even though most folks have no idea how it gets its spiciness.

The key ingredients are scotch bonnet or cayenne peppers and allspice, along with cloves, cinnamon, scallions, nutmeg, thyme, onion, garlic, among others.

Grilling the chicken over pimento wood or coal lends to the true authenticity of the Jamaican jerk chicken preparation.

Matt Sulem, in The Daily Meal column on the popular website Insider, has named Jamaican jerk chicken as one of the spiciest food on the planet.

Incredibly spicy, but very popular is the verdict on the preceding.

That said, recipes abound on the Internet regarding the preparation of Jamaican jerk chicken.

3 whole chickens cut in half

3 limes cut in half

Squeeze fresh lime juice all over chicken, ½ a lime for each ½ chicken.

Puree all other ingredients in a food processor.

Rub mixture over chicken, cover and leave to marinate overnight in refrigerator, or at least four hours.

Grill mostly on the bone side then finish skin over indirect heat till crisp and charred in spots.