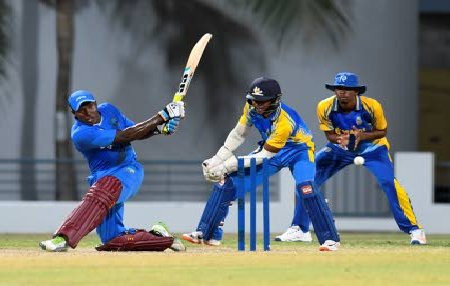 Contrary to the naysayers, cricket competition continues to attract fans and generate a lot of interest and excitement not only for sports enthusiasts in the Caribbean but also throughout the diaspora.

The 2016 Caribbean Premier League (CPL) Twenty20 (T20) tournament has started with a bang with crowds swarming the games, heated discussions, and lots of predictions on which team will win the competition.

In addition, there is a lot of chatter especially on social media regarding the rising stars among the young Caribbean cricketers.

One of the names creating the biggest buzz is young Jamaican cricketer Rovman Powell.

The attacking 22-year-old batsman, who also bowls handy medium pace, has been drafted to play for Jamaica Tallawahs this season.

This right-handed pace-bowling all-rounder is neither a novice with the bat nor ball as he has already played for both Jamaica and the Combined Campuses and Colleges in Caribbean domestic cricket.

He made his List A debut in January 2015, playing for the Combined Campuses against Guyana in the 2014–15 Regional Super50. In the match, he took 3/20 and scored 31 runs on debut, and was named man of the match.

In addition, he made his first-class debut in the 2015–16 Regional Four Day Competition, playing for Jamaica against Guyana.

In a press interview, Powell expressed his delight in being drafted into Jamaica Tallawahs’ team and commented that his hard work over the years is now paying dividends.

“I feel good about the CPL. It provides the opportunity for us as young players to showcase our talent. It’s a means of putting what you have to offer on the table. People can expect me to represent my family, friends and the brand Jamaica Tallawahs well,” he added.

The free-scoring middle-order batsman enjoyed a good season with both bat and ball as UWI recently reached the semi-final of the two-day club competition.

“I am keeping sharp [though] the Senior Cup [club competition] has finished. I am currently in Barbados playing in their domestic T20 and 50-over competitions,” he reportedly said.

He also opined that he is looking forward to rub shoulders with the international stars such as Captain Christopher Gayle and exciting all-rounder Andre Russell, and South African fast-bowling great Dale Steyn.

“I’m looking forward to being a part of the Tallawahs set-up and to try to learn as much as I can from the international stars,” Powell also said.

He added that Gayle and Russell have inspired him to not only work hard but also to aim high.

“It is also my aim to have a similar impact on the world as they have. They have done extremely well in showing us that there is still a place in the world for you, even when you are from humble beginnings,” continued Powell.

The 2016 CPL T20 is scheduled to run from late June to early August.

The Tallawahs are slated to host four matches in July at Sabina Park.