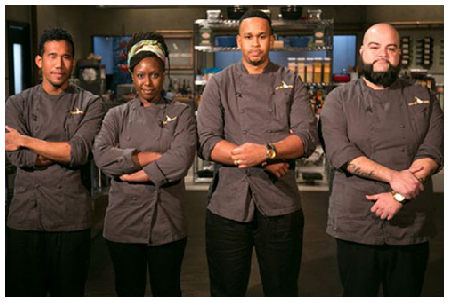 KINGSTON, Jamaica – Jamaican-born Andre Fowles was victorious on Tuesday when he lined up on the Food Network’s highly acclaimed series Chopped.

With Caribbean cuisine as the focus of Tuesday night’s flavour-filled show, he walked away as the winner.

Fowles, who is currently the resident sous-chef at Miss Lily’s — an authentic, vibrant Jamaican restaurant in New York — left Jamaica in 2014.

Prior to joining the team at Miss Lily’s, Fowles worked for two years as chef de partie under the tutelage of Martin Maginley, multi-award-winning chef at the cashmere-chic Round Hill Hotel & Villas. He also worked at Kingston’s celebrated Mac’s Chop House under the celebrated Mario Machado.

Originally from Kingston, Fowles attended Donald Quarrie High School and was trained at the Runaway Bay HEART Academy. He credits his grandmother, Veronica Davis, affectionately called ‘Mama Cherry’ for his foray into the culinary arena.