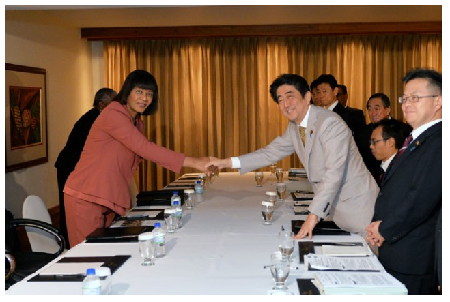 Prime Minister Shinzo Abe visited Jamaica for the first time in his capacity as head of Japan, an island nation in the Pacific Ocean.

In a press report, the Prime Minister described Jamaica in glowing terms and reportedly said, “I had always hoped to visit Jamaica, so it was with great pleasure that I accepted the invitation from Prime Minister Simpson-Miler.”

“I could say that if they are asked about Jamaica, any Japanese would answer that it is a country of athletics, Blue Mountain Coffee, Reggae and beaches. There are some persons who would add rum and ‘Cool Runnings’,” he further said.

“Although Jamaica is far from Japan geographically, Japanese people feel very close to Jamaica through various areas such as music and sports,” he added.

His two-day official visit has paid rich dividends for Jamaica as the host country will now receive technical cooperation to promote greater energy efficiency and development of its capacity to respond to natural disasters.

“We were very impressed and excited with the performances of Jamaican athletes who participated in the 15th IAAF World Championships in China this year, having had pre-Championship training in Japan,” he also told the press.

The Prime Minister’s visit comes amidst the 51st year of bilateral relations between Kingston and Tokyo, which he described as “amicable”. He recalled that on the 50th anniversary last year several events were held in both countries, “bringing not only extreme enthusiasm but also greater mutual understanding among the people of our two countries.”

“I also wish to expand the dialogue and cooperation with Jamaica as partners in the international fora which share fundamental values such as democracy, respect for basic human rights and the rule of law. When the first-ever Japan-Caricom Summit was held in July last year, I had fruitful meetings with Caricom leaders, including Prime Minister Simpson Miller. That first year of Japan-Caricom friendship has been very memorable for me,” he told the Jamaica Observer.

“On that occasion, I announced Japan’s Caricom policy which consists of three pillars: 1) Cooperation towards sustainable development, including overcoming the vulnerabilities particular to small island states; 2) Deepening and expanding bonds founded on exchanges and friendship, and 3) Cooperation in addressing challenges of the international community. We will continue to build on these three pillars without undermining one pillar for another,” the Prime Minister reportedly said.

He stated further that Japan and the Caribbean islands wrestle with similar challenges such as hurricanes and rising sea levels caused by climate change. Consequently, Japan views the environment and disaster risk management as a priority area for its assistance to Caricom, he noted.

“Jamaica has had a major challenge in securing affordable energy. Last July, I received a request from Prime Minister Simpson Miller for cooperation in this area. Just like Jamaica, Japan imports much of its energy resources and is vulnerable to fluctuations in energy prices on the international market. Having experienced the oil shock twice, Japan has developed technologies to help us achieve energy efficiency and promote renewable energy. I believe that Jamaica can benefit significantly by taking advantage of these technologies and expertise.

“In addition, Japan will assist Jamaica in its development of capacity-building in the area of natural disaster response through the provision of Japanese experts, training and equipment.

“At the Japan-Caricom Summit, I expressed the importance of providing support from perspectives other than those based on per-capita income, taking into account the ‘vulnerabilities particular to small island states’ that Caricom member states face. The new cooperation with Jamaica will bring this policy into shape. Japan will continue to provide cooperation for Jamaica and other Caricom states, based on their needs,” the Prime Minister reportedly declared.