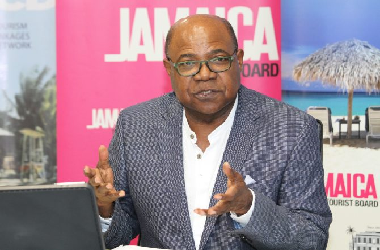 Minister of Tourism, Hon. Edmund Bartlett, says the 7,000 airline passengers, who arrived at the Sangster International Airport (MBJ) in St. James on December 11, are a prelude to what is to come for the winter season.

Citing the number of arrivals as a single day record since the reopening of air travel on June 15, 2020, Minister Bartlett said tourism is rebounding and showing signs of its former strengthen.

He said that barring the unforeseen, the sector is set to recover faster than anyone would have predicted 12 months ago.

“Receiving such a large number of air passengers into our largest airport in just one day is a clear indication that demand for Jamaica’s tourism product remains strong,” Mr. Bartlett said.

“As predicted, based on feedback from several of our key international tourism partners, we are progressing well on our path to recovery and expect to welcome approximately 1.5 million visitors this year. This is largely due to the success of our comprehensive JAMAICA CARES program, which ensures that travelers feel safe and confident in choosing our island for their visits,” he added.

A total of 52 flights from commercial, charter, and private aircraft landed at SIA on December 11.

Among the commercial airlines were American, Delta, Frontier, JetBlue, Southwest, Spirit, and Sun Country from the United States; and Air Canada, Air Transat, West Jet, Sunwing, and Swoop from Canada.

Minister Bartlett said that to meet the higher demand for Jamaica, American Airlines recently upgraded the aircraft utilized on flights to Montego Bay from its major city hubs of Dallas/Fort Worth, Miami, and Philadelphia.

“As of November, the carrier is utilizing its new wide-body Boeing 787-8 Dreamliner for these operations. Other tourism partners that had noted increased demand for Jamaica in the near-term included Southwest, Expedia, and Amadeus,” the Minister added.

He said that not only does Jamaica remain open for travel but continues to welcome visitors safely.

Minister Bartlett noted that the country’s health and safety protocols “were among the first to receive the World Travel & Tourism Council’s (WTTC) ‘Safe Travels’ recognition” that allowed the destination to safely reopen for travel some 18 months ago.

“It must also be noted that there is an uptick in cruise arrivals and that 90 per cent of all planned tourist investments remain on track,” he said.

“We must never forget that when all seemed lost, we found a way to reopen…we found a way, via the resilient corridors, to keep our visitors safe and secure…and we found a way to deliver where our tourism sector is poised to return to some pre-COVID numbers,” he added.

Chief Strategist and Senior Adviser in the Ministry of Tourism, Delano Seiveright, said that the Jamaica Tourist Board (JTB) and Minister Bartlett deserve a lot of credit for the positive developments in the sector.

“Don’t for a minute believe that things just happened by chance. When the airports and seaports were closed, Minister Bartlett issued a decree that we all need to huddle and strategize like we have never done before. Nobody winced…nobody folded and here we are today.”